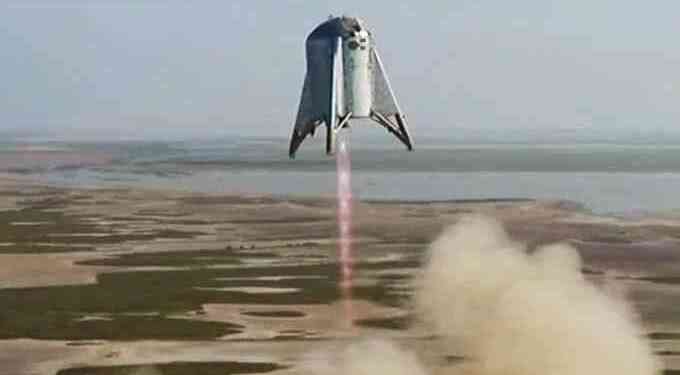 SpaceX Starhopper, Raptor rocket to 150 meters and managed to land safely on the ground.

SpaceX has completed another important test with the StarHopper tool. In the test which is a preparation for the Starship, the Starhopper, which likened to the water tower, stands at a height of 150 meters and performs vertical descent again. The process until safe landing takes about 50 seconds. In a test conducted in July, the vehicle had risen 20 meters for 22 seconds. It should note that StarHopper has only one rocket.

Starhopper has hopped. On 27 August, SpaceX’s stubby spacecraft made its highest and longest flight yet from the firm’s Texas launchpad. The spacecraft’s last test, in July, took it just about 18 meters in the air, but with this test, it was planned to fly 150 meters up, hover, and move sideways before gently landing on the nearby landing pad. SpaceX has not yet confirmed whether Starhopper reached the full 150-meter altitude, but the flight was clearly far higher than the previous test. It lasted nearly one minute from launch to landing.

SpaceX plans to get the Starship team out of Earth’s gravity using 6 or 7 new Raptor rockets. It also knew that the rockets will provide 11.8 million pounds of propulsion for total takeoff. For the Starship project, which will take humanity to the Moon and beyond, these tests are crucial.

After the test flight, SpaceX CEO Musk tweeted “one-day Starship will land on the rusty sands of Mars”. Starhopper is a prototype of SpaceX’s planned Starship spacecraft, which Musk has said the firm will use to send humans to Mars. Starship will be much larger than Starhopper, with six engines compared to the prototype’s single one.

This test was Starhopper’s last. Two teams in Texas and Florida are building bigger prototypes that are more similar to Starship, with three engines each and more robust landing gear. When those are finished, their test flights are planned to take them as high as 20 kilometers.