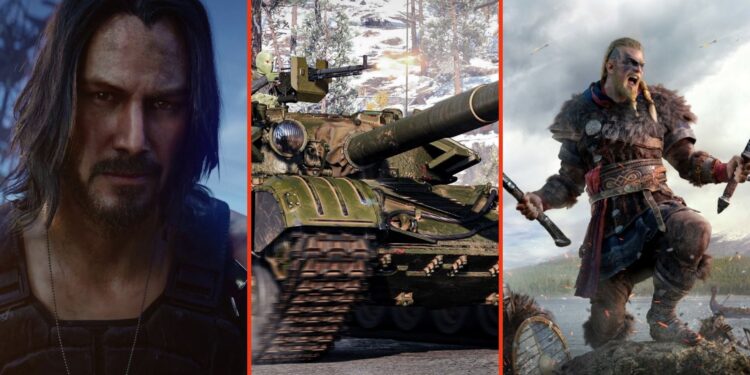 We will have plenty of games to play in November

Time flies… 2020 is getting closer and closer to the end. Although this year is not going so great when we talk about life, it seems like it is going well for games. Developers come up with great games in 2020. And we will look at the 7 great games that will release in November. You should also note that the games listed on this list are ordered randomly.

7 Great Games that will come out on November

I assume that every racing fan heard of this series. This series has a very special place on the veteran rally players. (We Salute you, Colin McRae.) And now, the legendary series continues with DIRT 5. It is the eighth instalment of the DIRT series. The game will release on November 6. It is also one of the first launch titles of Xbox Series X/S. It will also launch on PC, Playstation 4, Playstation 5 and Xbox One.

Miyazaki’s Masterpiece is back with enhanced gameplay and visuals. It is also one of the launch titles of PlayStation 5. The bad thing of this game is that it will be only available for PlayStation 5. But if you are one of the lucky ones that will own the console when it will release, then all I want to say is, Git Gud!

The upcoming Assasin’s Creed game is the twelfth main instalment of the series. In the game, the player takes control of Eivor. The game has similar mechanics to Assasin’s Creed: Origins so it will more likely be a Role-playing game rather than just a story-driven assassination game. The game will be available for PC, PS4 and Xbox One, Xbox Series X/S PlayStation 5 and Google Stadia. The release date of the game is November 10.

We continue our list with another Ubisoft title. But this game uses the benefits of technology, rather than swords and shields. The game will also have a gameplay which we have never seen before (Maybe just Driver: San Francisco if you count that of course.) You can change your character anytime you want. The game is an action-adventure third-person video game.

In the near future, London is facing its downfall: the people are being oppressed by an all-seeing surveillance state, private militaries control the streets, and a powerful crime syndicate is preying on the vulnerable. The fate of London lies with you, and your ability to recruit a resistance and fight back. The game will be available on November 10 for Xbox Series X/S and November 12 for PlayStation 5. Other platforms will see the game earlier though. For PC, PS4, Xbox One and Stadia, the game will be available on October 29.

It’s been almost 17 years since the original Call of Duty came out. The series started its adventure with some WW2 theme. Then it evolved itself over the years. Now we are in the cold war era with this upcoming title of the Call of Duty series.  The game is set in the early 1980s and is a direct sequel to the original Call of Duty: Black Ops. Call of Duty: Black Ops Cold War is the seventeenth game in the Call of Duty franchise and the sixth game in the Black Ops series. The game will be released on November 13th for PlayStation 4, PC, Xbox One. In the upcoming days, we will see a re-release for the next-gen consoles.

The title is already released in Japan. But it still hasn’t been released on the worldwide market. So we will have to wait just a little more to play this RPG. This game is the eighth main instalment of the Yakuza series. The game is mostly based around the Yokohama district of Isezaki Ijincho, but it will also feature the Kamurocho, Tokyo and Setonbori. Yakuza: Like a Dragon will be available for PS4, PS5, PC, Xbox One, Xbox Series X/S on November 10. Yakuza: Like a Dragon is also the launch title of the next-gen Xbox Series consoles.

I guess this is the game that we all are waiting for. It is also the last game of the 7 Best games of November. The Developer CD PROJEKT RED is very artsy with this title. The game follows the story of V  a hired gun on the rise in Night City, the most violent and dangerous metropolis of the corporate-ruled future. A robust character creator will allow players to choose V’s gender, visual appearance, as well as historical background all of which may influence the shape of the game. The game will be available for us to play on November 16. We will be able to play the game on almost any platform. The game will release for PC, PS4, PS5, Xbox One, Xbox Series X/S. The game will be available for Google Stadia too, but the developers didn’t give us a certain date.

As we said before, November will be a great month for gamers. The new consoles, new games and titles… And we tried to manage to find the 7 Great games to play in November. We hope you enjoyed our article. If you want to have a spooky Halloween, you can also check out the Best Horror games you can play on Halloween. See you next time!