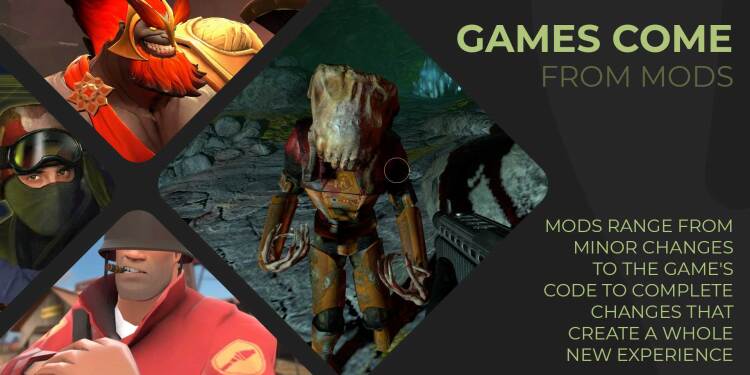 Mods range from minor changes to the game's code to complete changes that create a whole new experience. Here are some games come from mods.

Independent games are born in a variety of creative ways, either in someone’s garage or as mods for pre-existing games. The Mod is an adjustment to traditionally free PC games. These range from minor changes in the game’s code to complete changes that create a whole new experience. Mods not only achieved fame and success but also helped build several companies in the process. We have listed the games come from mods, which is essential as historical for all of us. No matter how quality a game is, it is the players who love that game and want to spend more time who will take it further.

In addition to extending the life of the games much more than they could be, the mods also break the chains that the game producers hit the game. Maybe we can say that with Half-Life, the biggest reason why the mod world is as strong as it is today. Mods can include total transform codes that can replace nearly every aspect of the game to add new experiences, visual upgrades, characters, and more. It is also based on impact. How did these mods change the game world? It is not exactly a small playground.

Mods can often be plentiful online after a new major PC video game has been released, by the way, some developers even go so far as to provide the player with the appropriate tools to create modifications for their video games. These mods often help extend the lifespan of a video game title after its release, but few become so popular that it sparked interest in making the Mod its own standalone game. We have listed the games that come from mods for you.

We’re sure everyone has heard of Team Fortress. Team Fortress Classic developed and released by Valve in 1999, and it is a first-person shooter video game. Two teams fight each other in online multiplayer games. Also, the game has been modded with the GoldSrc engine. Each team member plays as one of nine classes, each with different skills. Scenarios include capturing the flag, territorial control, and escorting a “VIP” player, and this paved the way for Team Fortress 2. Quake’s simple multiplayer mode has finally grown Valve by almost billions of dollars.

First of all, let’s talk about the producer team Black Mesa Team. We are talking about an inexperienced group of 30 people. The common point that brings these 30 people together is that they are all massive Half-Life fans. There is an 8-year effort in the middle, and you can download and play the game for free from its site or Steam.

There is excellent dedication, determination, and excitement. Officially, they’ve left Valve with nothing but to release the game on Steam, bringing a breath of fresh air to Gordon Freeman’s original story and his crazy adventures in the new workplace for both new players and veterans. They modded the game using the robust and reliable classic Resource engine.

It is one of the funniest indie games on Steam. It inspires many players to create elaborate mods. Garry’s Mod is one of the weirdest video games introduced to the world. The game was a video game developed by Garry Newman that served as a home for gamer creativity. At its core, Garry’s Mod is a sandbox-style game where no goals but tools and assets are available for players to create their unique worlds or scenarios.

These tools allow players to create many game modes. The game uses the modified Havok Physics Engine version of the Resource engine; This adds realism by allowing players to build unique objects and structures that follow the laws of physics.

Counter-Strike is the pinnacle of all game modes. This multiplayer Mod has revolutionized the first-person shooter genre in PC games. CS was also born as a mod of Half-Life’s engine, GoldSrc. Although it seems pretty hard to believe, Counter-Strike was born as a mod created by Half Life’s fans. Minh Lee and Jess Cliffe transformed the alien world of Valve’s single-player Half-Life into the terrorist and counter-terrorist multiplayer mode. There are several game modes in this challenge where you can face various objectives, such as placing bombs and defusing them.

Also, the game grew so rapidly that Valve designers hired Minh Lee and Jess Cliffe to create the retail version of Counter-Strike. CS: Go, the sequel to Counter-Strike, made eSports history with its major championship, with more than 71million views and a record-breaking 45 million hours of live broadcast in 2016.

DotA 2 mod released in 2002 by Kyle Sommer using the world editor tool in Warcraft III. Like the other video game titles on this list, an active community of gamers caught the attention of a studio. Finally, Valve stepped in and offered a standalone version of this game called DotA 2.

In the game, players choose and direct one of the hundreds of Heroes with unique abilities and play styles. DotA 2 received high praise from critics overtime for its gameplay, quality, and loyalty to the original title, and it was the first game to use the Source 2 engine. Additionally, DotA 2 has one of the largest prize pools reported to be over $ 18 million.

Modded Games Has a Bright Future

Computer game modes have increased in popularity day by day in addition to the game world we are in right now is quite exciting. However, what awaits us in the future is a complete mystery. Developers began to offer opportunities for young talents to showcase themselves. Many thanks to everyone who brought modding to this point. Maybe they weren’t aware that they were making history, and they did all this just for fun.

As a result, PC gamers have a prominent front, and getting the vast majority of content is free or very affordable compared to other products. It is also PC gamers who will enjoy lots of creative and new content in their favourite games. Of course, not all modes will release as a separate game. Often some modes change entirely or develop the game. For example, Witcher 3 mods allow the production to play for many years.

We have listed the games come from mods for you, and you can also be sure that we will continue to highlight the best of the modding scene here on Play4uk. If you want to see list of games which come from modes read this article. We can’t wait to see what’s next!