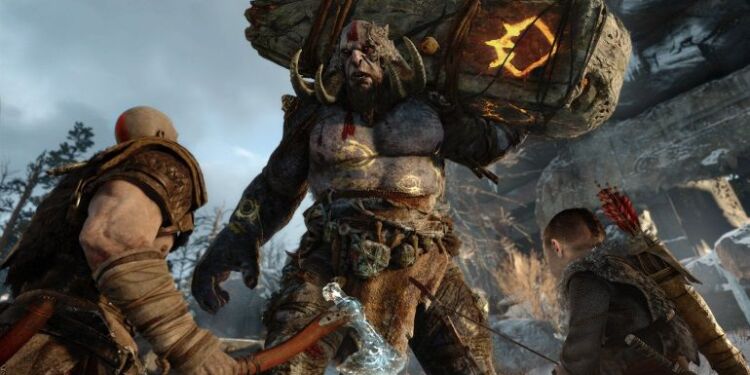 God of War 2018 Review (Playstation 4): We will be with Kratos and his son Atreus, on their new journey, which turns into an epic adventure.

At least, we are ready to play God of War 2018. Here is our God of War 2018 Review. Kratos leaves his chaotic background behind and sails to the new God of War adventure with Atreus. With the opening of God of War, you are able to shoot you through your life, and you are beginning to realize how sad you are sailing into a dreary and tumultuous adventure at the game’s menu. When Atreus says above something is starting to break out for us.

When we look at God of War in general, we see that the series makes a whole new beginning. Moreover, it does not only mean the mythology and the story, but also the meaning of the game. This time we do not have a production that focuses only on playing, entertainment or wildness. On the contrary, you are faced with a production that you are curious about every corner and you are admiring. First of all, Sony is very conceptual about character relationships in the sense of the story. This system, which the company had previously confronted in the Last of Us, managed to carry a completely different place, such as God of War, where it had to be dragged into chaos. That relationship between Kratos and Atreus allows you to empathize and at some point, you can even find a piece of yourself.

“Let me teach you something, son!”

I do not want to spoil of anything except the points we already know about the story of God of War because you understand how much the production team wants to keep it explored while playing. A lot of it hides the story from you and keeps the curiosity as high as possible. Especially in the first 4-5 hours, you are dying to know even for the smallest hint of the story because it does not offer much in this regard. Nevertheless, when you remind the emotional moments and breaking points in the first minutes of the game, you are beginning to forgive this misery of the production as well.

Kratos, who is known as head crusher is now hanging around like in his retirement. Of course, when he faces the unpleasant situation, he still crashes. Years have taken a lot from Kratos visually, but we are faced with that character that we always know in terms of power and determination. This time, he portrayed a character who was trying not to be angry but rather to go with solid steps as in the main theme. For Atreus, there is really too much to say. You asked to be the caregiver for a kid however you don’t know how to deal with it; it’s the same here with Atreus.

That relationship between Kratos and Atreus

It allows you to empathize and at some point, you can even find a piece of yourself. Atreus rushing around with curiosity, depending on your progress is starting to leave a solid character impression. You are beginning to witness that the character who lost his mother at the beginning of the story who is childish at the same time who is starting to stand on his own feet. Of course Kratos’s share on his sons’ improvement is also great. Although he approaches the ruthlessly as you will remember from the E3 videos, he fulfils his duties well.

Here, the relationship between the two is positioned in the centre of the game. So the game you’ve gone on a long adventure, at the same time, turns into a journey between Kratos and Atreus. Dialogues between the two and the wise side of Atreus makes the dynamic of the game stand strong. Even when you are piddling around, you can see how successful the dialogue between the duo is and you start to enjoy the game even more. Even though Atreus respects Kratos to death, he doesn’t stay away from needling him with his words. Obviously, even in very serious moments, I can say that some dialogues cause me to smile. Kratos’s effort to cope with Atreus, as we know it, is quite brutal.

God of War 2018 Review (Playstation 4): We will be with Kratos and his son Atreus, on their new journey, which turns into an epic adventure.