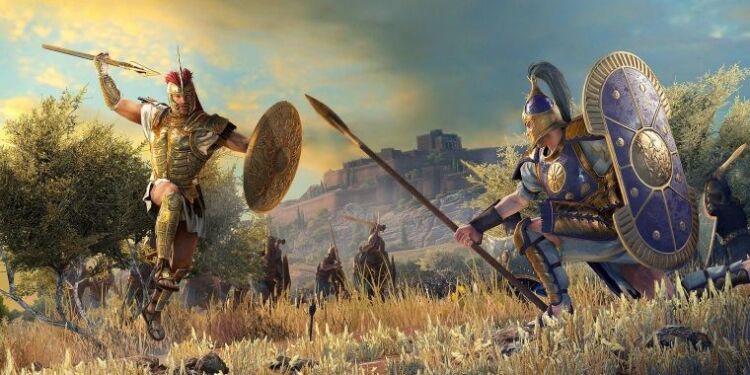 We are here with our A Total War Saga: Troy Review, which reached 7.5 million players with the effect of being given free on the day of its release.

Total War series usually is known as the games reflected historical incidents successfully. The series figured itself until now with the plays represented truly historical events in the different games specific to territories like Medieval Europe, Japan, Ancient-Rome. Besides, two fantastic games that adapted the Warhammer world brilliantly were released under the name of Total War. Thanks to A Total War Saga: Troy, we go back to the bronze age and we get the chance to witness Trojan War that Homeros narrated in Ilyada.

A Matter of Honour in Bronze Age

The game’s main subject is the decennary war between Trojan Paris and Spartan King Melenaus and his brother King Agamemnon. Helen, the wife of Melenaus decides to escape and marry with Trojan Paris. Melenaus takes this as an insult and starts the Trojan War. After choosing a side between Achaeans and Trojans, we choose a character between four heroes. Although every character has a story and some specific quests, our main goal is to win the Trojan War.

As we said, faction every side has four special characters. Danaan (Greek) side consists of the fabulous character Achilles, Mygenean King Agamemnon, Spartan King Menelaus, and Lord of Ithaca Odysseus. In Trojan side, we have Prince Hector, Prince Paris, Aeneas (son of Aphrodite), and Sarpedon (son of Zeus). The level of difficulty is different for every character, and every hero has his own special unit. Also, characters have their own special missions.

We have to be careful about these character-specific quests because these quests are the key points to win the game. Defeating the enemies and controlling the whole map is our subject to get the Total War Victory. To get the “Homeric Victory”, we need to complete the character’s specific quests. Quests like beating the enemies in duels with Achilles who is ready to fight everyone who underestimates his strength, the struggles between Paris and Hector to win their father’s favour and Menelaus’ fight to take back his wife Helen provides us with the Homeric Victory.

A Total War Saga: Troy which is about the Trojan War is the most retrospective game in the Total War series. Taking account of having little information about the bronze age and mythic/fantastic elements in ancient Greek; we taste more different and creative approach than other games. Even though the game has some elements from ancient Greek mythology, creators did not prefer a fantastic route as Warhammer. We will talk about the harmony issue between the mythic elements and real stories. I can already say that the producer did his best.

It is Called Centaur But It is A Mounted Infantry…

Even though Trojan War reminds us of the Trojan Horse, mounted infantry is not a common martial unit in the Bronze Age and even its appearance in the game takes a long time. We usually control an army which consists of infantry units in wars. These infantry units are separated into 3 branches: light, medium and heavy units. The speed and stamina of these units depend on their weight. Depending on the length of the war, these units play an important role to gain the victory. The number of the units that we control in the army is less than the other games of the series. So new players can easily adapt to the game.

It is impossible to think that there are no mythic elements in ancient Greek. As I said, the Creative Assembly did a good job about this. The creator team added powers of gods and mythic units to the game but also succeeded to stay in real life. Seven different Greek gods from ancient Greek mythology like Zeus, Ares and Aphrodite stir up trouble between the people who are unloyal to them. But the loyal people get rewarded by those Gods. Gods have undirect effects in the game like natural disasters or the army’s increasing martial stamina. We don’t see direct powers like a stroke of lightning on enemies.

There are mythical units that we can add in our armies. These units are called mythic creatures but actually, they are just stronger mortal people. For example, semi-human Minotaurs and semi-ox are seen as huge warriors wearing ox-skull in the game. Similarly, Centaurs (semi-human and semi-horse creatures) appear as mounted infantries similar to cavalries. We can have mythic units by visiting some territories on the map or we can get theö depending on how we get along with Gods.

The economy of old Total War games is almost completely based on gold and similar currencies. Now, we have more options with A Total War Saga: Troy. The sources separated as food, wood, stone, bronze, and gold. We need different sources for every work. While constructing a building we need wood. Bronze and stone needed for creating units. Food is the most important source, whereas gold earns a reputation later on. Other than only battling, we have lots of things to do in the game like using the sources wisely, getting along with Gods, and balancing diplomatic relations.

I seem to hear you saying, “You told lots of positive things for the game. Aren’t there any negatives in this game?”. We can say that there are some notional negatives in the game. For example, the number of units is not enough in comparison to other Total War games and this situation causes less strategic variations in wars, especially during the early stages of the game. Do not expect performance in the matter of diplomacy like Civilization although the games have some innovations about this issue. I also observed some of the interesting actions of artificial intelligence. Surprisingly, weak lords ask me hundreds of units in turns of nothing and when I reject them, they want to command me in a self-confident way. There is no multiplayer option in the game yet. Producers released it just with a single-player mode and we need to wait till November. Even though it sounds nice to try different character combinations with your friends your and to fight with enemies; it is argumentative whether waiting for the multiplayer mode in these days when new games are released one after the other.

A Total War Saga: Troy is a very good option for the ones who are willing to start the Total War series. Strict followers of the series may be unhappy because of the decreasing number of units and decreasing martial strategic moves. At least, multiple-source economy and developed diplomatics eliminate the martial insufficiency in the game. Characters have different playing styles and different struggles, so we don’t feel as if repeating the same actions in the stories.

If you want to experience Ilyada by Homeros, to challenge to Hector with Achilles in front of the Trojan gates; it is very difficult to find another option than this game. It is also possible to create an alternative ending by playing with different characters. Moreover, Amazon DLC will be added to the game in the future. With this DLC, the Amazon tribe which consists of only women will be added to the game. This pack will be given free for players who will provide the needed process in Epic Store.

Is It Worth To Buy

At first, the game released only in Epic Games Store, but it will be available on Steam in the future. Give a chance to this game if you have added it to your library for free on the first day of release. A Total War Saga: Troy is a good game because of the easy learning curve. The strict fans of the series may not find it the best Total War game but it is a successful turn-based strategy game that implies the following games will be more joyful. We hope you liked our A Total War Saga: Troy Review. If you liked, you can share it, by using social media icons.