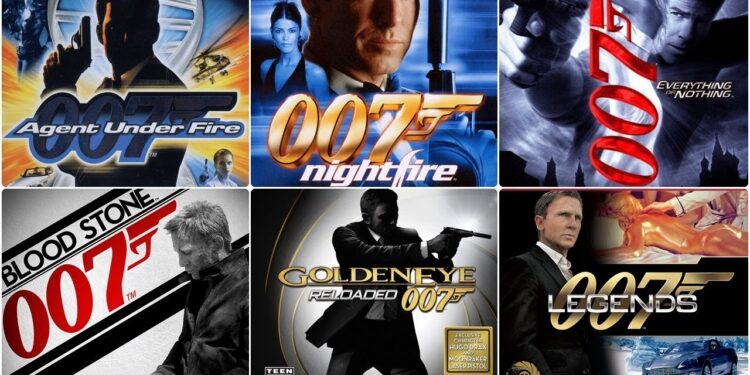 James Bond. A brand that is famous both for its movies and video games. And most probably, we will not forget 007 in the upcoming years, as there is more content coming out almost every year. And after the news we have got from IO Interactive, there is a brand new James Bond project coming out. To celebrate this news, we listed the 10 Best James Bond Video Games that have ever existed. Without further ado, let’s jump to our top 10 list. Enjoy!

10 Best James Bond Games Ever Made

If you ask why this is the number 10 on this list; here is a short and clear answer for you: The game does not feel like an actual James Bond game. Blood Stone is eventually a good cover-based shooter by itself. But definitely not good for a James Bond game. The story is also short. When I played the game myself, I could finish the title in just six hours. But I must admit that Blood Stone has excellent locations to visit, such as Istanbul, you can also drive the famous Aston Martin in this one.

You might get angry when you see Goldeneye: Rogue Agent one place up than Blood Stone in our Best James Bond Games list. I know that Rogue Agent is not a great game, but it gives you a unique opportunity, as are not James Bond in this one. You are a villain named Goldeneye. This decision has been made because when this game was being developed, there was no actual James Bond. As Pierce Brosnan left the brand in 2002.Goldeneye: Rogue Agent is available for Nintendo DS, GameCube PlayStation 2 and the Original Xbox.

I must say that I love all the Bond games developed by Electronic Arts. So this one is a classic for me too. Also, Sean Connery was his own voice actor in this game. You could also play split-screen with your friends. Or just finish the single-player mode and unlock extra content. However, this does not make From Russia With Love best of the best Bond games that are out there. Because it had some bad gameplay back then. James Bond 007: From Russia With Love is available for PlayStation 2, PlayStation Portable, GameCube, and Original Xbox.

Another Electronic Arts classic. Agent Under Fire is a real James Bond game. Because it is one of the best Bond games out there that makes you feel you are the real Bond. You have various gadgets, car driving sections, and of course, the iconic Golden Gun. Considering that this one came out in 2001, it is not a bad game at all. If you have a PlayStation 2 at your home, you should give it a try if you still haven’t.James Bond 007: Agent Under Fire is available for PlayStation 2, GameCube, and the Original Xbox.

This one developed by Treyarch and published by Activision. Just before the release of Call of Duty: World at War. There are two things I didn’t like in Quantum of Solace. The first one is; we play the game in first-person-perspective but when we take cover, then the game forces you to play in third-person mode. The second one is the short playtime. The second fact is kind of acceptable because as I said before, Treyarch was working mainly for World at War.007: Quantum of Solace is available for various platforms because of its release date. Including PlayStation 3, Wii, PlayStation 2, Nintendo DS, Xbox 360, and Microsoft Windows.

We are in the top 5 in our best James Bond video games list. And the number 5 goes to this classic. Nightfire has one of the best action-paced campaigns in the James Bond video games series. But what makes this one important is its multiplayer mode. I remember playing with my friends day and night in front of our CRT Television and good old PlayStation 2. Nightfire will make you remember the good old times once you boot it up. My favourite character on multiplayer mode was Renard for sure.James Bond 007: Nightfire can be found almost on any platform. Including GameCube, PlayStation 2, Game Boy Advance, Microsoft Windows, Mac OS, and the Original Xbox. You can download this one by clicking here. It is currently considered as Abandon-ware. So you will not be doing anything illegal by downloading Nightfire.

There is not much to say about the 007 version of Goldeneye. Because it is actually a remake of the original Goldeneye that released in 1997. However, this definitely does not make this one bad. Because Activision did quite well with the remake. Also, the developers took the multiplayer experience to a different phase. In case you didn’t know, the multiplayer mode of the original Goldeneye was available only for local play. But with this remake, you could play it completely online. Goldeneye 007 was released originally in 2010 only for Nintendo Wii. After that, a re-release came out for PlayStation 3 and Xbox 360.Goldeneye 007 is available for Nintendo Wii, Nintendo Switch, PlayStation 3, and Xbox 360.

Everything or Nothing was ahead of its time. This one made feel like a real AAA game. And it is also the best third-person James Bond game that is out there. With various gadgets, weapons, vehicles, Everything or Nothing is just a perfect title. The only thing that did not exist was the multiplayer mode. But who cares? You could still play split-screen with your friend. I should thank Visceral Games and Electronic Arts for making such a great Bond Game.James Bond: Everything or Nothing is available for GameCube, PlayStation 2, Game Boy Advance, and the Original Xbox. Sadly, there is no PC version of this masterpiece. But if you have a good computer, you can give it a shot by installing a PlayStation 2 emulator.

There is not much to say about Goldeneye. the game is not only the best James Bond game but one of the greatest shooters ever. The game has such a great campaign that speed runners still play it. But what makes Goldeneye so unique is the multiplayer mode of it. It is no surprise that Goldeneye tops this list.

The original James Bond is available exclusively for Nintendo 64.

We are at the end of our best James Bond video games list. In further days, we will see if IO Interactive’s upcoming James Bond title will hit number one in all of the Bond games that are out there. Until then, stay home and stay safe everyone!