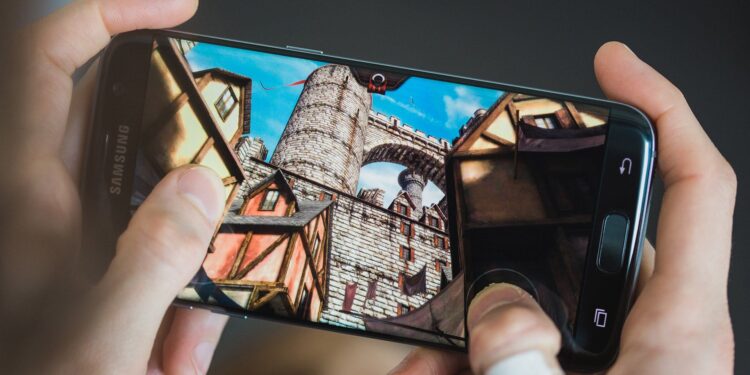 Mobile gaming is our savior sometimes.

We all love playing games. Whenever we have the chance, we just start playing them hours and hours. But we cannot be at home to play games with our consoles or computers. While travelling with public transportation, waiting for your turn on the line and even at work when we have nothing left to do. At that times mobile games are our savior. If you have an Android mobile phone, why not have a look our best 10 free Android games list? ( Listing is not from top to bottom.).

Genshin Impact is an action game with RPG elements. And one of the biggest hits in mobile gaming. The game also have PC version and the mobile version is nearly the same with the PC version. The story of the game is really nice and when you get bored playing with the same character, you always have other teammates to summon. Of course, you need the add those teammates to your party. The gameplay is pretty easy. The game also supports cross-play. So you can play with peopla on IOS, PS and PC.

Battle royale games are one of the most popular game genre among gamers. And PUBG and PUBG mobile is one of the best of this genre. It features a 100-player battle royale war on an island. Players able to loot their gear, weapon everywhere on the island and then fight with the other players to be the last man standing. Of course the game has team fights also. The developers update the game all the time. So the game stays up to date all the time. PUBG mobile has millions of players at the moment.

Not only on mobile, Roblox is one of the most popular games in the gaming world. With its open world structure with limitless things to do, this is not so shocking. And the game doesn’t need a high end device, too. You can play the game even with the oldest android phones. The game supports cross-platform and available for nearly all platforms. The game also includes chat function.

Asphalt series is among the best mobile racing games. The game gets better with every new version. Sometimes it is like a simulation game, sometimes it is an arcade game. But in most of them, players are able to upgrade and modify their cars to progress in the game. The game has 50 licensed cars in its roster and of course supports multiplayer. The only negative side of the game might be the auto acceleration. Players cannot control their cars acceleration. The graphics are awesome. The game is free but of course there are micro-transactions. So if you want to move one step further than your rivals, you can use the advantages of micro-transactions.

Alto’s Odyssey has a simple but awesome gameplay mechanics. You just jump and jump higher over obstacles while skiing down the mountain. The game has great graphics and relaxing soundtrack. The players can also pick up objects to sell and buy some customisation elements. The game has an absorbing atmosphere so you cannot understand how time passes while playing it. There are microtransactions in the game but they are just visual elements. They don’t provide any in-game advantages. So you don’t have to buy them. The progression is all up to your skills and of course up to your patience.

When it is first out in 2016, Pokemon Go is the best and most popular game. And the game is still popular. The developers keep the game up-to-date and releases events all the time. The aim of the game is to travel the world around you and catch Pokemons. While trying to catch Pokemons, players need to take down gyms and discover PokeStops. Players can fight other players’ Pokemons and even trade Pokemons with other players. And the game continues to evolve. So it will be on the best games list for a long time.

Pocket City is a city building game similar to Simcity. It’s the best alternative to Simcity on mobile. Players can build roads, residential zones, commercial zones, schools, hospitals and etc. They also have to deal with disasters. The free version of the game is not as detailed as the premium version. But players can still enjoy the core mechanics of the game with the freemium version. We want to add that the freemium version has also advertiments from time to time so this can be annoying sometimes. But Pocket City is still one of the best city building simulators among the mobile games.

Most of the gamers know or hear about Blizzard’s deck building game Hearthstone. Game is being played by turns and players try to batter their opponent’s health down to zero with their cards in their decks. We can say that the game is has a friendly structure even for the new players to the genre. Players can strenghten their decks with the card packs after each win. Or they can but cards packs with real cash also. But it is possible to be on top without spending a single penny. It’s all about strategy, a little bit of luck and patience. Because to have the best deck without spending real cash needs some time.

Aquavias is a relaxing puzzle game. The aim of the game is to deliver water to the cities. You just build aquaducts and rotate them to deliver water. If you cannot, cities will suffer from drought. But of course the game is not as easy as it sounds. The game gets harder after each stage you passed. Sometimes you have limited moves to rotate the aquducts, sometimes you have time limit or rapidly draining reservoir. But of course the game is not impossible to beat. Like every puzzle game, you need some logics and of course patience. The game has nice graphics and relaxing music.

Yes, this is the orginal board-game scrabble that you play with your friends. EA managed to get the license of the game and published it on the mobile platform. Everyone knows what Scrabble is about so we won’t try to explain the aim of the game. But basically, you try to create words with the letter in your hand. Every letter has its own points and when you combine them with the points on the board, you multiply the points you gain. We believe that Scrabble deserves to be in our best 10 free Android games list.

So this is our best 10 free Android games list. Of course this is our point of view. If you think that another game needs to be in the list, you can tell us in the comments. You can also check our Last 10 year’s Best 10 Indie RPG Games list. Stay tuned, enjoy.