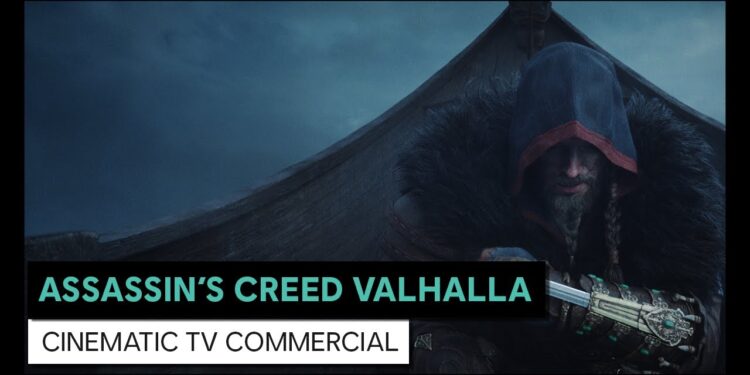 A cinematic TV commercial of Assassin's Creed Valhalla, the role-playing game developed and to be published by Ubisoft, has been released.

A cinematic TV commercial of Assassin’s Creed Valhalla, the role-playing game developed and published by Ubisoft, has released. When we look at the published trailer, we see more closely the epic cinematic battle scenes. As well as our character named Eivor, which we will control in the game. The game will be released on November 10. Such as Xbox One, Xbox Series S, Xbox Series X, PlayStation 4, Google Stadia, Epic Games Store, and Uplay platforms. Furthermore, on November 12 for PlayStation 5. Users who purchase the game on current generation consoles will be able to upgrade to the next generation for free.

Exiled from Norway with endless wars and dwindling resources in the ninth century, AD. Eivor will lead a Norse clan across the icy North Sea to the rich lands of England’s divided kingdoms. In his quest for victory, we will explore a dynamic and beautiful open world in a deadly setting in England’s Dark Ages in the game. We will direct the character of Eivor, a legendary Viking warrior. By attacking enemies in the game, we will enlarge our settlement. Also, build our political power to gain our place among the gods in Valhalla.

In PlayStation Store, Microsoft Store, and Epic Games stores, you can access the Standard version, the Gold version, and the Ultimate version of the pre-order game. By pre-purchasing the game, users will be able to access the additional mission. Such as The Way of the Berserker which is about the revenge of a legendary Viking warrior.

Here is an overview of the game, via Ubisoft:

In Assassin’s Creed Valhalla, you are Eivor, a fierce Viking warrior raised on tales of battle and glory. Explore a dynamic and beautiful open world set against the brutal backdrop of England’s Dark Ages. Raid your enemies, grow your settlement. Also, build your political power in your quest to earn your place among the gods in Valhalla.

All Assassin’s Creed games have successfully reflected their era. Some of these games, which tell real periods with fiction, reflected historical events more successfully. Assassin’s Creed, Ubisoft’s most famous game series, has come up with many games in these years, good or bad. The game, which reached a huge fan base especially with Ezio’s story, had different time intervals as well as in different places. The game series which took place in such a wide period, of course, sometimes applied more to fiction and sometimes remained more faithful to historical events.

In that article, we’ll take a closer look at the Assassin’s Creed Chronology, which takes us through the dusty pages of history. If you have trouble starting the series from the beginning and want to start directly from Vallahalla, we presented the whole story to you in a short form in our article.

Finally, you can take a look at the cinematic TV commercial of the Assassin’s Creed Valhalla below.