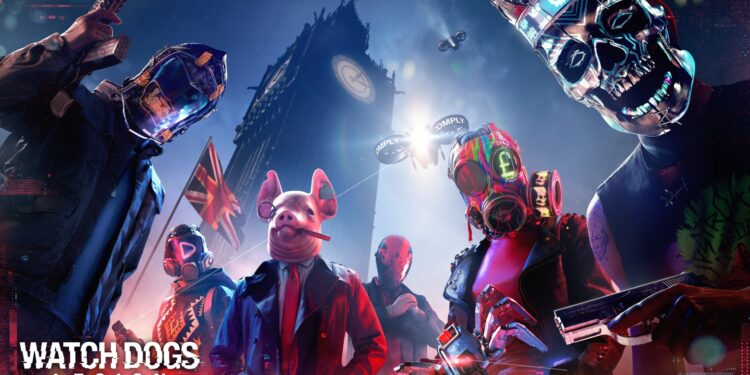 Watch Dogs has always had a wonderful concept. It’s an excellent idea to interact with almost every technological device you see around you. Although the first game of the series implemented this idea nicely, the fun factor of the game was completely forgotten. The sequel added more to the first one in terms of fun and variety. As we can see in its trailers, Watch Dogs: Legion, which looks like a sequel based on the second game, let’s see what it added to the previous one. Without further ado, let’s start our Watch Dogs: Legion review.

The story takes place in the period of the collapse of the UK economy, which is suffering from artificial intelligence shortly. We start the story as Dalton Wolfe, a member of the hacker group, DedSec. We are trying to prevent the plans of a group called “Zero Day”, which is planning to demolish the Parliament Building with explosives. However, just as Wolfe tries to neutralise the explosives, Zero Day detonates additional explosives around London, plunging the city into chaos.

Dalton, whom we only for a short time, gets killed before he could provide evidence that Dedsec was not even remotely involved in the bombings, and the crime is entirely on Dedsec. After this explosion, the British government makes a deal with Albion, a private military company, to get London in order. Since the culprit of these explosions is seen as DedSec, the group cannot be as active as before and left to retreat into its shell. As a member of the DedSec group, we recruit new members to our team to get rid of the slander against us and try to remove this black stain on behalf of our group.

After the introduction is over, a screen appears for us to choose our character. Each character has a different special ability. For example; Some characters have vehicle abilities while others have some hacking gadget abilities. So you have got plenty of opportunities to choose here. This gives you a great deal of convenience in your tasks. I personally chose a character with a motorcycle to try out the vehicle driving mechanics. After completing our choices, we step into the beautiful streets of London. When we look at the city in terms of detail, it looks very nice and satisfying. It makes you feel as if you are really in London as you step through the streets of it.

The map is quite large, and there are plenty of places to go to. Since there are plenty of side missions, you can find tons of things to spend time and deal with. Speaking of the city, I also want to say a couple of things about driving mechanics. Honestly, the game disappointed me with driving dynamics. Suppose you ask why almost nothing has contributed to Watch Dogs 2’s driving mechanics. The bad vehicle mechanics of the previous game continue in this one, too, unfortunately. While using any vehicle, it seems that it has not reflected the weight of that vehicle.

I think we came to the event that bothers me the most in the game. Optimisation. I don’t know if this problem is only related to me, but I had to experience Watch Dogs: Legion with an average of 45 FPS. Not to mention the loading times and in-game hang-ups. With my laptop with GTX1650, I was able to reach this FPS figure by pulling everything to the lowest. I can say that this incident severely undermined my gaming experience. As I said, this may be a situation solely due to me. However, this does not change the fact that the graphics of the Watch Dogs Legion are nice, and the colour palette is used. But I think they can overcome this problem with future updates by Ubisoft. Let’s also not forget that Ubisoft Will use Nvidia’s Ray-Tracing technology in Watch Dogs: Legion.

Let’s come to the most striking point of Watch Dogs Legion. Every NPC you see in the game is a playable character. This may seem familiar for some of you because a similar mechanic was also on Driver San Francisco. I must admit that this mechanic gives the players freedom. For example, let’s say you got bored and you want to change characters, you can play as a grandma who is waiting for a bus. However, they say that every good thing has a price. In Watch Dogs: Legion, we can see how true this statement is. Because to add the character that we have envisioned to our team, you have to fulfil what the character asks from you.

I have to say that I am satisfied with this subject. I’ve added over 10 characters to my team and haven’t seen a repetitive task in any of them. These missions may repeat as the game progresses. But I can say that they keep the task pool at a sufficient level. Does this mean that we will take part every time we add new members to the team? Fortunately not. Because the NPCs you help in random incidents on the streets of London agree to join your team directly. Let’s not go without specifying this.

The characters we manage have some features that make them stand out. For example, when you choose an assassin, you swing flying kicks in close combat. But this hits a downside to your hacking abilities. The same is true for NPCs with high hacking abilities. But since there are more characters than you ever wanted, it is necessary not to get caught up in such minor details. At the same time, I would like to point out that when you develop a skill in the skill tree, these enhancements affect all characters. In a way, this prevents you from dealing with each character separately.

But that doesn’t mean there are still no shortcomings in characters. For example, there are so many characters you can play in the game that after a while, more than one character is voiced by the same people, and it leaves a feeling as if you are playing with the same character. Besides, it seems that some characters are not vocalised well enough. For example, the character I chose first when starting the first time had almost no English accent. He was trying to do it, but I can’t say he was very successful. I can say that this recruitment system also prevented sticking to a single character. Character customisation is also available in the game, but there are so many characters in the game that you need not to customise the characters you play.

There is equipment for everyone in the game, from electronic brass knuckles to an invisibility cloak. I can say that this has provided a plus to the playing style. It is also possible to upgrade this equipment with the money you earn from the in-game missions and the open world. This means you have to update each equipment separately. I can say that the equipment offered in the game is quite sufficient.

Yes, let’s come to the game’s missions and task variety part. Although the story of the game tries to say something in an entertaining language, these narratives are greatly overshadowed by the repetitive tasks. For example, we go to take charge; we start with fun, humorous dialogues. Later of the game, the tasks that are given to you start to repeat itself. To give an example; You are taking on a story-oriented task; they ask you to hack the place assigned in the mission and make DedSec propaganda. Although these may sound fun at first, the missions given repeat themselves after a while. Although the tasks on paper are different, they basically remain the same. So, in my opinion, a task should not be just hacking a door with your phone and trying to kill an enemy secretly and complete the mission.

We can also use spiders and drones as equipment in the game, but basically, everything we do is the same. The only difference is that we do these jobs sometimes in different equipment and locations. Unfortunately, I cannot say that they did a very catchy job on Watch Dogs 2 in terms of story. However, there is a situation that the game’s Multiplayer mode was not available at the time of writing this review. Missions would be more fun in the multiplayer mode. Maybe who knows?

Is Watch Dogs: Legion Worth To Buy?

I commented on Watch Dogs: Legion, the product that Ubisoft has recently made a name for, with my own observations. As I mentioned above, if they paid a little more attention to the missions, character and vehicle handling mechanics, I guess it could be one of the most sound titles of this year. However, I think those who love Watch Dogs 2 will love this one too, as it contains mechanics from the previous title of the series. Nevertheless, Watch Dogs: Legion is not a game that I can clearly recommend for players looking for story-based adventures. But I still think that the title is very innovative and has a lot of potentials.

However, since this is not fully integrated into the game, it offers a few uninspired gameplay elements and a repetitive structure. Nevertheless, Ubisoft’s innovative feature that we can control every NPC can be a milestone in the gaming world. Who knows, maybe, we will see more often the titles we control a lot of NPCs, thanks to Ubisoft’s brave breakthrough. In this article, I commented on Watch Dogs: Legion for you. I hope I could give you enough information with a review of mine.

Watch Dogs Legion is a game with lots of potential in it. Although it is an innovative game, it seems that these innovations could not be implemented in the game.