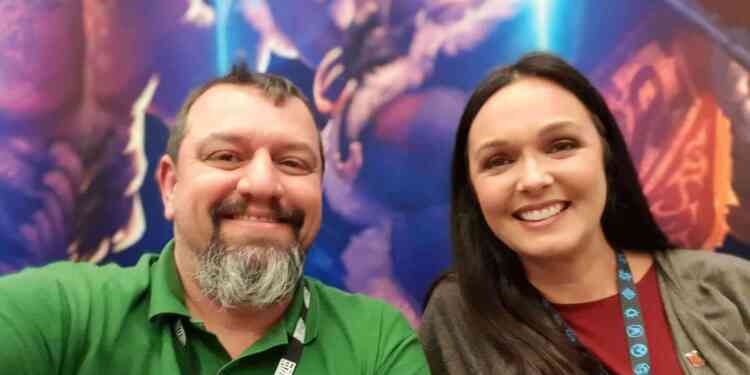 We asked her important questions about Blizzcon 2018

Blizzcon getting bigger every year. This is the first time only a manager has been appointed responsible for Blizzcon. We talked with Saralyn Smith, the Executive Producer of Blizzcon and asked their plans for the next years.

Murat: First of all can you introduce yourself?

Saralyn Smith:  I’m Saralyn Smith and I just passed my seven year anniversary at blizzard but I am new to this role at BlizzCon as April. Blizzard created you know they wanted to have an executive producer over Blizzcon which is new to Blizzard and Blizzard executive team took me aside and asked, said, “Hey we have an interesting idea for you.” Before that I had been leading community development at Blizzard and I really love that work and I guess the step into BlizzCon it is the biggest community show that we have all year and you know we co-created with the community so it was a real honour to be asked.

Murat: This is your first BlizzCon as an executive, how you feeling?

Saralyn Smith:  It’s been great it’s really fantastic there’s a lot that goes on in the live event and you know so now you know seeing it I think this is my sixth Blizzcon as an employee but now I kind of know everything goes into it and all the moving parts. And really I I am very impressed with the teams they’ve you know Blizzard done this twelve times now and like our events team are just world class and got you know great broadcast talent and web talent and yeah there’s a I I do feel very grateful because there’s a lot of passion and love that goes into Blizzcon.

Murat: So is what is the hardest part of making the Blizzcon this year.

Saralyn Smith: Well to me you know right now the physical presence is limited to them how many people we can fit into a building. So you know and I’m convention center this year we made some tweaks to lay out and we were able to bring that forty thousand people and we’re really happy about that but the blizzard community is global and it’s all over the world and so to me that the biggest opportunity we have is how do we bring the Blizzcon experience to more of our community everywhere, and so some of that is online and always you know will be we got people watching the opening ceremonies in the E-Sports, people experiencing the virtual ticket, and this year we wanted to make that virtual ticket even more interactive like how do we keep bringing that ritual audience into the show as well and making them feel meaningful to them so I think we had some good first steps this year we want to keep investing their, and we’ve even seen interest coming to us for a viewing parties in different parts of the world we know people at movie theatres or maybe you know you have the fireside gatherings for Heartstone and they already know that there is an audience that wants to watch blizzcon and so we’re trying to keep up and figure out how we can support those things better. So those are all potential ways you know to help bring more of the community into the BlizzCon experience.

Murat: So, how you going to improve Blizzcon following years?

Saralyn Smith: Well always going to do a lot of debriefed after the show and you know we survey everyone online am and here so we pour through that feedback for quite a long time and. Yeah will be very interested in that but we do want to keep innovating like with the the programming that you see you know how can you make it’s it’s a live experience so how can you make that even more interactive make you know people feel even more immersed in our games and our IPs or the cinematics and so yeah there’s a lot of the fun creative opportunities out there to you.

Murat: I think the greatest part of the Blizzcon is charity area. But this year it is a little bit out of the stage. Do you think it will affect the sales?

Saralyn Smith: We’ll have to look at the data because we certainly wanted to be a feeling prominent and I know a lot of people do make their way there it’s a very popular part of the show, yeah and we try to bring a lot of charity into you know the spirit of that because our we know our community so invested in good causes and so we have like the benefit dinner you know on Thursday night we have we’re hosting a call of duty in down in here gotta make a wish family here we have the charity auction end up those are things that feel like a priority for us and I think it’s a feel good for the community as well as us and so we’re very open to feedback and more ideas.

Murat: Can you give us a little bit more info about Make a Wish foundation?

Saralyn Smith: Make a wish so we have this year a child from the Netherlands and that is battling cancer, and so there’s a program called make a wish you know you’re just trying to bring some joy or delight into a child’s life during this time maybe it gets their mind off of things and even can help them on the path towards feeling better but sometimes it you know a child’s wish is to come to Blizzcon or come to Blizzard campus or meet one of our developers and so we love the make a wish out partners that we have and so yeah this year we do have an individual and they brought some of their family with them and we give them a special experience of the show.

Murat: Blizzcon getting bigger year by year. Every year, we see that Blizzard opens new areas like Arena and Moonlight Fairy. What will we see next year? Because as i see there is not much space left.

Saralyn Smith: We are it’s one point two million square feet which well I’d say it’s twenty one football fields. We’re taking up every square inch here. Who knows what will be next , there’s still a lot of great ideas that we have to make room for it so do we start spilling out into the city of Anaheim them I mean I think it’s fun to think about bringing at least parts of Blizzcon to other parts of the world you know where our community is and so there’s a lot of fun opportunities out there that are thinking about.

Murat: So lets talk about numbers. I think its record year for BlizzCon, more then 40.000 gamers joined this year. But, i’am curious about Virtual Ticket sales. How many virtual tickets sold this year?

Saralyn Smith:  I can’t tell you about virtual ticket sales numbers but I can say that even from last year we had over a 180 different countries out that people are tuning in from.

Saralyn Smith: In previous years way it was laid out we are trying to get most chairs in there. But then throughout a lot of the show, there was never at full capacity again because you know people want to see things from every franchise they’re going into the franchise hall and so part of being able to help you know our tickets on second so we know that a lot of people would like to be here in this experience. So actually having during the opening ceremony having people spread across the show floor you know like last year was the first year we through two different stages during the broadcast that actually really helps us. So we now don’t have the burden of having this one space that we have to use only during that time is it really at Max capacity. So yeah having more people across the show floor watching opening ceremony gave us room for more demos and I think that will they’ll probably be something to continue we’re just trying to find you know more ways to bring more people here but we want to be cognizant of them. Everyone able to have a seat if they want to sit down and we’re thinking about the demo lines we don’t like to see people who waiting too long so it is a fine balance between a how many people we can get into the physical space in and just making sure protecting that experience.

Murat: Thank you for your answers.