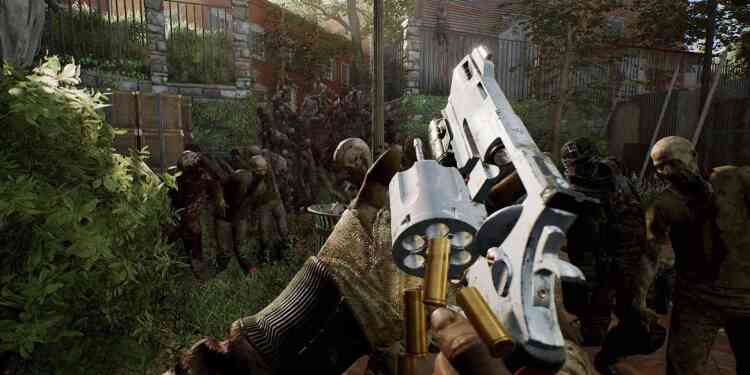 “No Sanctuary,” the first episode of the next big season of content, adds a new full-length mission, improved tutorial onboarding, in-game voice chat and more

Starbreeze, Skybound Entertainment and 505 Games have announced the start of season two of OVERKILL’S The Walking Dead on Windows PC via Steam. Included for all players who own the standard and deluxe editions of the co-op multiplayer action game, this first major content update introduces a new full-length story mission, improved tutorial support for newcomers and the highly requested addition of in-game voice chat.

Season two picks up with the main group of survivors facing new challenges in the aftermath of season one’s finale, including a powerful new enemy fortified on Washington, D.C.’s historic Capitol Hill. The first episode – “No Sanctuary” – sees players stage a daring raid on a Georgetown church to rescue a potentially life-saving informant. Season two will feature nine episodes from November 2018 to June 2019, containing new missions, playable characters, weapons, mods and other surprises along the way.

OVERKILL’s The Walking Dead has also been updated with new features driven by player feedback since the game’s launch earlier this month. In-game voice chat is now supported within Steam, enabling players to better communicate and coordinate with each other. A new video tutorial available in game – “The Survival Guide” – offers first-time players a more robust introduction to the game’s core mechanics with helpful advice for staying alive. Finally, restructured files will help the development team continue updating the game with new content and improvements at a quick and reliable pace.

Inspired by Robert Kirkman’s original graphic novels and developed by OVERKILL – A Starbreeze Studio, OVERKILL’s The Walking Dead is a four-player co-op shooter where players must band together on a variety of missions to find survivors, secure supplies and survive. Use stealth to evade enemies tactically, or dismember walkers limb from limb with brute force and firepower. Each of the game’s playable characters has their own special abilities, skill trees, squad roles, play styles and background stories.