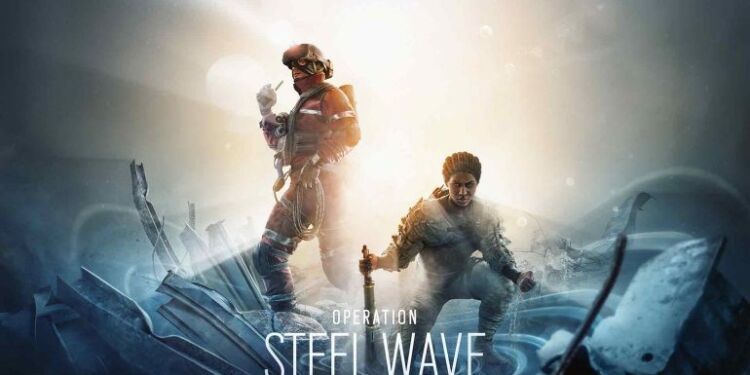 We take a closer look at the content of Operation Steel Wave, and new operators that Ubisoft recently announced for Rainbow Six Siege.

In the description of Caveira’s “Silent Step” feature, it is written that the enemies are seen as prey and that he uses predatory secrecy to defeat the opponents. The word “skull” may be describing a collecting technique used by many predatory fiction characters (like Predator…).

In the description of Capitao’s “TAC Mk0” equipment, there is a series of arrows that allow you to shoot fire and micro-smoke. These arrows, which have more than one quality, are the exact equivalent of the word “rain”. When these arrows are shot consecutively, it creates an “arrow rain” effect.

We have touched upon an example of many unknowns… Now let’s take a look at the words “Steel” and “Wave”, which are our main subject.

“Steel”, means Ace, which attacks the word steel. This word used to describe hard and durable objects means indestructible walls and barricades for Rainbow Six Siege. It can be easily understood that Ace is a “steel wrecker”.

The word “wave” means the defender Melusi. The waves we see in the promotional video; It is similar to an advanced sonar system used for communication and object detection. Another of the possible thoughts is that this feature is a kind of advanced echolocation (sensing echoes from the bodies and detecting those bodies).

Ace, the attacking operator of Operation Steel Wave; What we saw with Operation White Noise goes down from a space similar to the elevator shaft in the “Tower” map, which was removed from the list with the 3.2.0 update after being included in the ranked list for a while. He then enters the enemy line by knocking down a wall that is strongly indestructible.

Melusi, the defending operator of Operation Steel Wave; a tree, which is said to be a type of acacia, sits in a tactical position and starts to emit sound waves.

“Even though there are a vast cliff and rock walls in front of me – nothing can stop me from bringing you home.”

“The man is Norwegian, Håvard Haugland. Its name is difficult to say, but easy to recognize. We call it Ace. It is quite surprising that an emergency worker works with the UN, their path crossed for Kali’s chance. His time with the Norwegian Armed Forces improved his rescue capabilities. As an Emergency Worker, he can remain calm (somewhat smug) even in the most stressful situations. While running to a stuck avalanche victim or a broken bone, Ace has the ability to keep those under his command safe and under control.

It may seem impulsive, but it’s also its determination that makes it successful against dangerous missions. I guess with a harsh effect, the assertiveness of situations can be positively affected. He enjoys social media and his followers seeing his heroism. After meeting him, I must admit that his abilities are as many as they are said.

… Ace is taken forward and makes an entry; an entrance that can pass through all barriers. He’s passionate but acts a little cautiously to make sure no one is harmed. The janitors reached military standards by changing their tactics and equipment.

… Ace always knows where to stand for the perfect shot, it could be a transition for his teammates or smiling at the camera.

We can understand that Ace from Norway has a structure that leads to team compositions. Kapkan’s intention to “… an entrance that can pass through all barriers” may be a sign that all structures of indestructible nature will be “destructible” for Ace. This suggests that he may appear on the scene as an alternative to the Thermite operator.

“A real hunter does not attack greed, he attacks as needed – and protects his own.”

I have some common principles with “Thandiwe” Melusi “Ndlovu, and I was amazed by his conservatism and dedication to the anti-snatching unit. We haven’t seen her surprised, but what about when she’s surprised? We would love to see his reaction.

… I agree with you, the focus of obstacle to surveillance can bring enormous benefits to the Program. I have no doubt about his experience with drones, but have you ever seen Melusi following the doorman? Even I would have a hard time chasing him among the trees.

As a result, Melusi can adapt to different situations. It waits, comes in, and prevents bad situations like a toy. If he cannot catch the target himself, he slows them down enough for others to catch up or regrets them against their actions.

… Melusi is a watchman. He observes, defends, and takes care of his job.

Melusi, South Africa defending operator of Operation Steel Wave; Coming as a complementary operator that stands out with its confidentiality, which can both follow and slow down the attackers, is a complementary operator. Based on what we saw in the promotional video and what Kapkan told us, we can interpret himself as a balanced defender operator, who does not have the potential for full attack or full defense.

Although Melusi seems to be an operator of the Clash alternative, the sentence that Kapkan said about “I would have a hard time even following him among the trees” refutes this thesis. The fact that an operator who stands out with his privacy makes such a comment shows that Melusi will not be in a position to protect himself with a piece of heavy equipment (shield, etc.). The only common points are; one is electricity and the other is slowing down its opponents by a wave.

“Leaks” from Inside Outwards

The feature of Melusi was leaked as an implantable device (Bandit – Electric Wire, Jager – Active Protection …). It is placed in the desired area and when activated, it detects enemy movements through waves, such as Lion’s EE-ONE-D feature, and slows it down by marking the opponent’s position for the duration it detects.