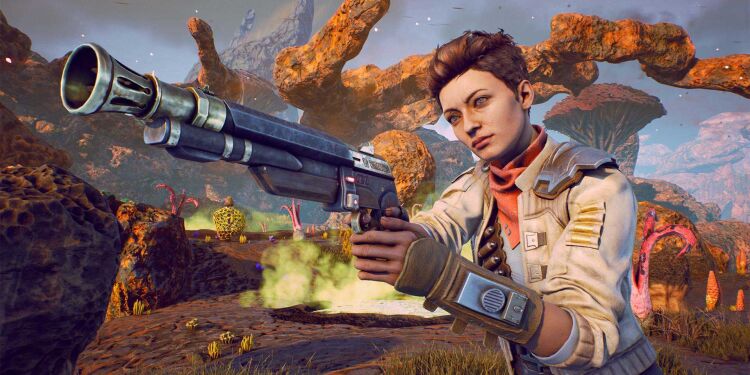 If you like classic role-playing games, The Outer Worlds will totally absorb you away from real life and keep you entertained. Also, the follower system is quite successful.

On this generation of consoles, powerful Role Playing Games have been released. Persona 5 locked players to the screen, appealing to hardcore gamers like those of Fallout 4 and the Divinity: Original Sin series. The Obsidian team, which has left its mark on similar games, has once again proved itself with South Park: The Stick of Truth and Pillars of Eternity. Earlier, the company got the hearts of gamers with Fallout New Vegas, took risks and announced a new project at the last E3 Expo. Obsidian and prepared to say goodbye to this generation under the name of The Outer Worlds, let’s see if they deliver what is expected of them again.

Former American President Willian McKinley was assassinated on September 14, 1901. The Obsidian team, which prefers an alternative universe in terms of story, tells the story in the context that McKinley is not assassinated. The US government, which is unable to rule the market for its own purposes because it is set in an alternative universe, finds the remedy to leave management to large corporations. In the continuation of the story, in which the capitalist order operates brutally, colonies begin to be established in space. As you begin to slowly enter the world of The Outer Worlds in 2355, you can see how much money, authority and rank people get. Of course, this story takes place in the background of the game.

At the beginning of The Outer Worlds, you learn that you are a passenger on a spaceship named Hope. Due to a malfunction on board during the voyage, our ten-year journey extends to sixty years. Then our main character, who is frozen wakes up like in the Passengers movie. Now we have to travel to another orbit using hyperspace. The scientist Phineas Vernon Welles, who also appears in the trailers, is forcibly taking us down to the nearest Terra 2 planet in order to save the Halycon colony to which we belong. At the end, our adventure begins as a stranger who has lost connection from our colony and has to return, on an unknown planet. In the construction, which includes two main planets, the planet in which we started the game offers a more friendly environment, while the other hosts a more dangerous environment.

The beginning of the story, which can be seen as a cliché from time to time, but with a huge mystery behind it, is quite interesting. Similar to Fallout games in storytelling, The Outer Worlds constantly reminds you of the importance of the main story during the game. In other words, even if you proceed with side missions, you feel that you have to return to the main story as soon as possible because of the environmental factors the game offers.

As we land on Terra 2, the game forwards us to the character creation screen. We can change facial features in a very detailed way but we cannot touch the physical features of our body. In addition to the appearance on this screen, the capabilities of our character are determined in detail. Body, Mind, Personality, you must bring together the three basic elements of our character. Because the decisions you make at the beginning of the game will take the basis of your story.

In the skill tree section, we create the detailed features of our character. On this screen we decide many features, such as being convincing in dialogues, having our hands on guns, and our engineering or medical skills will be. If you are familiar with FRP games, this screen will look familiar. In addition to the skill tree screen, there is also another talent selection part that changes the interaction with NPCs. On this screen -called Aptitude-, we choose what role we were on Earth before we started the story. We can choose that we are prone to occupations such as farmers, cleaners, bureaucrats or factory workers. You can also set your character as an unqualified element in this section. However, you should be aware that this option will not produce very good results.

Gameplay mechanics are deeper than I expected. We have a mysterious and intriguing story, but I must say that the main appeal of the game is in the mechanical details. At the same time, the most striking problems are in these mechanics. The Obsidian team wanted to prioritize our relationship with NPCs. NPC interactions have been overwhelmed by the game’s introductions. You have communication with NPCs only in the current situation. In addition, we cannot chat with every character we see. The Outer Worlds which brings the faces of the characters we interacted with in the home screen as in the Fallout games amused me in this part. NPCs are not included in the story depending on your choices. So while you are playing the game, you do not feel yourself as the centre of the world.

In addition to all these, I have to say that not all mechanics of the game work equally well. The open world of the game is lifeless and this is one of the factors that reduce the level of pleasure I got. The lack of routine animations that NPCs exhibit in the open world is the main reason for this. The Outer Worlds, which I think doesn’t have a big budget like other AAA games, unfortunately, didn’t get a passing grade from me in the open-world sense. In addition, the fact that the details I found in the open world were lower than Fallout New Vegas, another Obsidian game that appeared many years ago, made my expectations a little disappointing.

The biggest factor affecting wars in gameplay mechanics is the feature called Tactical Time Dilation (TTD). Just like bullet time, this feature slows down our time and character, so that we can decide more easily in battles. We also have the opportunity to aim at the vital parts of our enemies by using TTD feature. We can strengthen this feature by using perks. Fallout’s V.A.T.S. mechanic is very similar to the feature, completely added to the game to relieve players because wars are sometimes very challenging. I need to talk about the feel of batting when explaining wars. The range of weapons of The Outer Worlds is not as extensive as the recent Borderlands 3. Still, we can find interesting weapons. However, usege of weapons is not enough. Some of the weapons, which can be upgraded with additional apparatus, do heavy damage to enemies while others are unnecessary, making the battles of the game uniform.

The three-level perk system is generally compared to the perk systems that we encounter in other games. Damage, life and etc. The more we get from the perks that raise similar values, the more powerful our character can be. Likewise, our followers have special perks.

In addition to the role-playing mechanics of The Outer Worlds, our followers have become part of the most colorful aspects of the game. In time, we are able to direct these followers, whom we are friends with, as we wish in wars. This system, similar to Mass Effect, has added a different dimension to the wars. If you encounter a large group of enemies with your followers, you will be able to beat more easily. You can choose the type of tactics your companions will apply or how they will fight. Let us state that your followers don’t die in the game whereas everyone else can die. If one of your followers is lost in battle, after the mission, he/she will come directly near you at the end. This kills the game’s sense of realism.

The graphics of the game are far from realism compared to the other games of this generation. The Outer Worlds, which has a distinctive graphic style, has used the colour palette especially well. The colour harmony of No Man’s Sky is evident in the artistic designs of the game. However, it should be noted that the animation of the game is unoptimal. In particular, the NPCs are barren of lively animation which is one of the situations that hinders the enjoyment of the game. Obsidian made good choices for music and also did a great job in ambient sounds.

The Outer Worlds is a fun game with dozens of details in the sense of story, successful role-playing, and in some places, chronic errors. Obsidian’s a talented developer of the game world who has marked their name into recent periods easily.