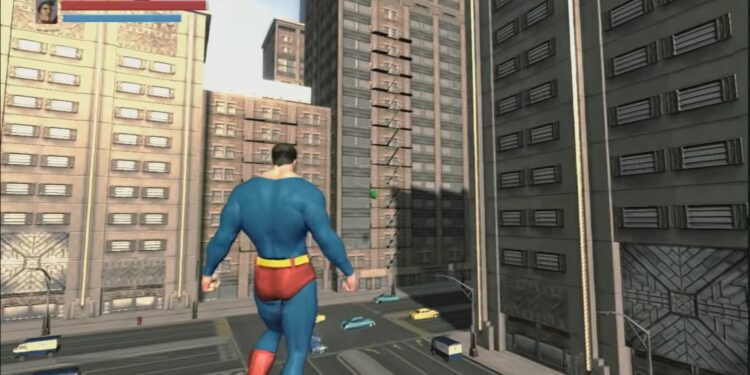 Let's take a look at what the game had to offer.

Today, the developer studio Factor 5 released the details about their Cancelled Superman Game back from the year 2008.

Over on Twitter, Savlatrix talked about the project, why it didn’t pan out and more. You can find the gameplay videos and more information about the Cancelled Superman Game just below. It is sad to see that this game didn’t make it. Even though the graphics and gameplay mechanics look really bad, we should keep in mind that these videos are unfinished.

In 2008, game developer Factor 5 was working on a major Superman video game for Brash Entertainment. The game was originally going to be a tie in for the second Bryan Singer Superman film which never got made, but evolved during pre-production to be based less on the proposed movie and more as a companion release.

The eventual financial crisis in late 2008 wiped out many game studios and publishers, including both Brash and Factor 5.

This video is a montage of actual gameplay from our first playable pre-production build. It shows the ease of engaging in melee brawling even in a full flight environment, as well as how that brawling interacted with the urban environment such as crashing through buildings (while still brawling).

In 2008, game developer Factor 5 was working on a major Superman video game for Brash Entertainment. The game was originally going to be a tie in for the second Bryan Singer Superman film which never got made, but evolved during pre-production to be based less on the proposed movie and more as a companion release.

The eventual financial crisis in late 2008 wiped out many game studios and publishers, including both Brash and Factor 5.

This video was a “target render” created by the artists during pre-production. It’s intent is to show what they gameplay might be like with visuals closer to the the final expectation (as opposed to the very blocky placeholder art in my other actual gameplay video –

Here is all the information about this Cancelled Superman Game:

In 2007/2008, I was lead designer on a Superman game that was never released – because the economy crashed hard. It killed our publisher, our studio (Factor 5), and the game.

I have multiple unreleased games through my career, but THIS is the only one I mourn to this day…

The goal was to present super brawls as they were seen in the cartoons and comics. JLU was our main touchstone. We put together this fast video montage to show what everything we wanted to have as gameplay. And we DID IT.

Aerial brawling, large urban environments, crashing through buildings, fast target engagement, knocking your foe into the next block, shockwaves from hits, impact grooves in the streets or building sides… all of it.

We hadn’t seen a game really deliver on that promise before, and to be honest I have yet to see it delivered fully since. We had it fully working as a prototype and were shifting to full production when the crash hit. All the main gameplay was in place and had been proven out.

We also didn’t want to rely on traditional gaming crutches of the IP – kryptonite and fighting robots. There were rules about the big blue boy scout (pre-Snyder obviously), but we were to surround Supes with foes more in his power range.

So I still am sad for what could have been. This was supposed to release alongside the sequel to the Bryan Singer Superman Returns film (which also clearly never happened). Not being able to see this through to release remains the biggest regret of my career.

So that’s all the information the developers shared about the Cancelled Superman Game.