Blizzard has released another highly detailed developer update for Diablo 4, which has been in development for a long time. With this new update, many dynamics in the game such as the skill tree system, items, weapon types, and legendary effects are included. The details published by the company are as follows;

Hello, and welcome once again to the Diablo IV Quarterly Update—our last for 2020!

Progress on the game continues at a steady clip and we’re excited about several big updates and revisions that the team’s worked on for a long time that we are trying to complete before the holidays. Today’s topic centers on one such major revision, which also happens to be the most requested topic this year: Itemization.

Items are the lifeblood of Diablo. They are the element of the game that captures your imagination and keeps you playing and wondering, “What if?” after you put the game down. Whether it’s anticipating the next piece of perfectly rolled godly gear or kicking around item combinations in your head like a mad scientist, items are undoubtedly a major part of what makes Diablo so compelling and so different from other games.

Understanding how important it is to get itemization right, we paid special attention to early player feedback about this part of the game. We knew that many more iterations awaited between what we showed you at BlizzCon 2019, our follow-up blogs, and the final game release. We also knew from past Diablo entries that we will need to have the time and resources to make these iterations—thankfully, we have that baked into our current schedule. Getting all of your feedback encouraged us to move some of that iteration time forward so that we could get our newest direction in front of you sooner.

Lead Game Designer Joe Shely is going to walk us through all of our major itemization updates today. We’ve reviewed every aspect of itemization from top to bottom and reworked elements that we felt weren’t living up to their potential—from the individual stats that our classes tap into to the visual representation of items in your inventory. Of course, it’s still early and we still have lots more playtesting and iterating to do, but we think this direction puts us down a more solid foundational path and we couldn’t be happier to share it with you today.

You can keep tabs on what we’re up to on social media, and as always, please tell us what you think of this update on our forums and all your favorite places to talk Diablo! We’re probably hanging out there too, and we’ll continue to look out for popular topics to tackle in future blogs.

Speaking of which, our next update will take place during BlizzConline, rather than in blog form. We’ve read speculation about what it could be and want to ensure you that it is something chunky indeed. Without spoiling the surprise, Iet’s just say it involves a new version of the campfire scene we showed you last BlizzCon.

Thank you all, and see you in Hell!

Today we’re going to look at some changes to items in Diablo IV and update you on a few things we’ve shared in our previous development blogs. In deciding what changes to make, we focused on three core ideals:

Since releasing the last quarterly blog post on the skill tree, we’ve been reviewing all of your feedback. Our team has also had a lot of hands-on time with our skill trees in frequent internal playtests, including an extended progression playtest. Based on this, we’re confident that it’s a solid direction, so we’re going to iterate on it and make further improvements. For example, we’re increasing the clustering of related skill nodes, so players don’t have to go across the tree to find skill upgrades for their builds.

The ability to re-specialize or ‘respec’ your skills is a tricky one to balance. Like many of you, we want choices to matter and characters to feel different from each other—not just one click away from being identical to all the others. We also want to encourage players to experiment with different skills when they start playing, and discover builds that are right for them. In Diablo IV, you will be able to respec your skills and passives. The number of times you can do this will be unlimited, but it won’t be free. It will be easy to do when you first start a character; as your character grows, the effort and cost required to respec will grow too. In the end-game, changing your build will require a significant investment, to appropriately match the time and effort you’ve put into defining your character.

In our last blog, we agreed with your feedback that too much of a character’s power came from the items they wore. And we liked the imagery conjured by the phrases “Angelic Power” and “Demonic Power,” but they didn’t reinforce the fantasy of what being a Barbarian, a Sorcerer, or a Druid is all about. So we went back to our roots and looked at the classic RPG elements of early Diablo games. What are you really doing when you wade through a horde of monsters and emerge a level higher on the other side? You’re training; also, you’re practicing a skill; you’re getting better at what you do. Becoming stronger, and smarter.

When you gain a level, you’ll receive points to spend in Strength, Intelligence, Dexterity, or Willpower, along with your skill points. Of course, most Barbarian builds are going to benefit from a healthy measure of Strength, but as you build out your character and decide on skills and synergies you’ll want to mix in other attributes. 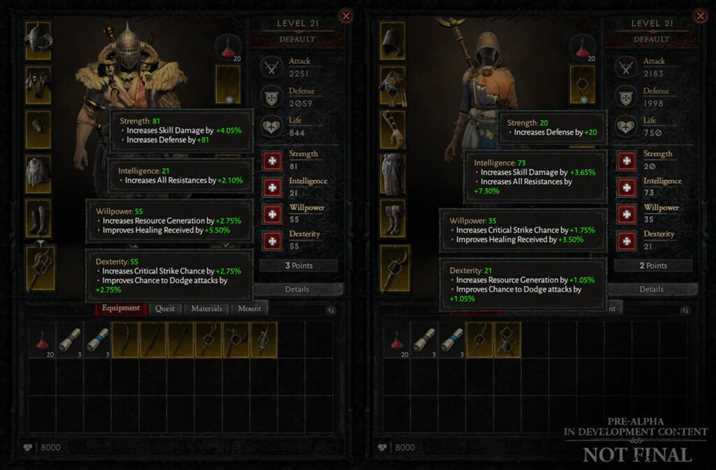 You can supplement your character’s stat build with items to give you a little more Willpower here, a little more Strength there, but the vast majority of your stats will come from how you choose to spend your points.

And here’s where it gets really interesting. Many of the nodes in each class skill tree have additional effects if you meet specific primary stat thresholds. You’ll get the baseline effect of these nodes when you spend the skill points to unlock them, but get enough of the corresponding primary stat and the bonus effect will activate.

As we hinted at in our last blog, we’re making substantial changes to core itemization.

We’ll start by looking at the many different weapons available to classes in Diablo IV. Our weapon types look visually distinct and have meaningful effects on gameplay through features like the Barbarian’s Arsenal. We’ve also done a lot of work in the game engine to make weapons feel more real and physical, like the Barbarian carving a trough through the ground with their mace during Upheaval.

But something was still missing. Wands should be faster than quarterstaves, and swords and maces should do different things. To see what that feels like in action, we’ve added weapon speeds and inherent characteristics to all weapons in our latest internal test environment.

In general, one-handed weapons excel at letting you attack and reposition quickly, while slower two-handed weapons deal more damage. You can really feel the differences between them.

In addition to speed, each type of weapon has an inherent physical characteristic. For shields this is block value, meaning that any shield you find in Sanctuary is going to have block, in addition to any magical affixes it may have. As physical properties, these traits are consistent across all weapons of the same type and cannot be modified.

You might notice another thing about these items: they’re high-resolution renders of the actual equipment. In a game like Diablo, icons are important. They often contribute as much to the identity of a cool piece of loot as the in-game representation on your character. Items that don’t appear on your character, like rings, are defined by their icons. We’ve upgraded all of them.

We’ve also made some exciting changes to the game’s item qualities. Philosophically, we like the clarity of analysis afforded by clearly understood item tiers. In other words, we think players of all skill levels benefit from not having to scrutinize every single item that drops to see if it might be an upgrade for them—blue Magic items are good, but yellow Rares are usually better. There’s a great feeling of progression when you graduate into items with greater complexity, more powerful effects, and cooler looks as you level up. And the game-changing powers found on the Legendary items in Diablo III are exciting and offer many possible effects that just aren’t possible with regular affixes.

That said, we don’t want to end up in a place where the right decision is to ignore every item that doesn’t have a glowing orange sky-beam.

You can think of Legendary items as Rare items with one affix replaced with a legendary effect. These new legendary affixes work just like regular affixes, in that they can roll randomly on different items and in different slots. Many can be used by any class, while some are specific to a particular class.

You’ll notice a variety of our affixes in the examples above, including elemental resistances and sockets for gems and runes, which can appear on items in place of another affix. And of course, Attack comes from your weapons while Defense comes from your armor. With the increase to the maximum number of affixes available on items, we’ll also be adding new affixes to the game to make sure there’s plenty of diversity.

Unique items are making a comeback in a big way in Diablo IV. We’re embracing the fantasy of these build-around items with completely fixed affixes, heavily thematic and usually class-specific powers, and distinctive looks.

We still like the idea of Mythic items, but we don’t want to create an item quality that invalidates all others, so they’re out for now. One of the things we loved most about them was the promise of getting random legendary powers on an item, so we folded that into our baseline legendary design.

With the addition of the skills and passives tree, primary stat points, and changes to items in Diablo IV, we can’t wait to see all the builds you’ll create. Maybe you’ll focus on skills augmented by Uniques we designed, create something from scratch out of different legendary affixes, discover a creative pairing of primary stats with specific skills, or even incorporate the odd Rare or Magic item to maximize a specific affix to great effect.

We’re excited to read through the community feedback on the updates in this blog. As always, please remember that none of this is final as the game is still actively in development. Your constructive discussions around these features will continue to help Diablo IV, and we greatly appreciate your support and thoughts about the game. We will continue working on itemization throughout the development of Diablo IV and we are looking forward to seeing you at BlizzConline next year! We have lots to share in 2021 regarding some of our other features and we can’t wait to tell you all about them. 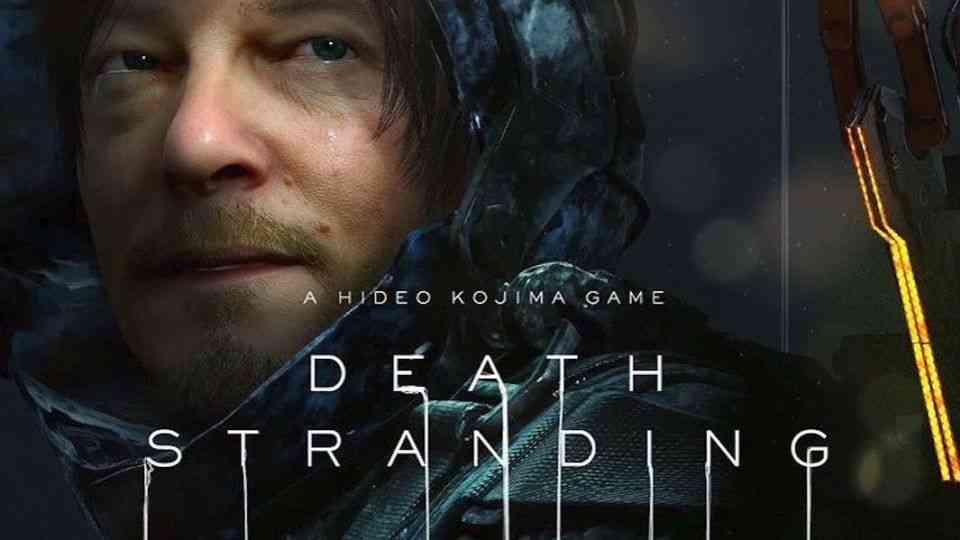 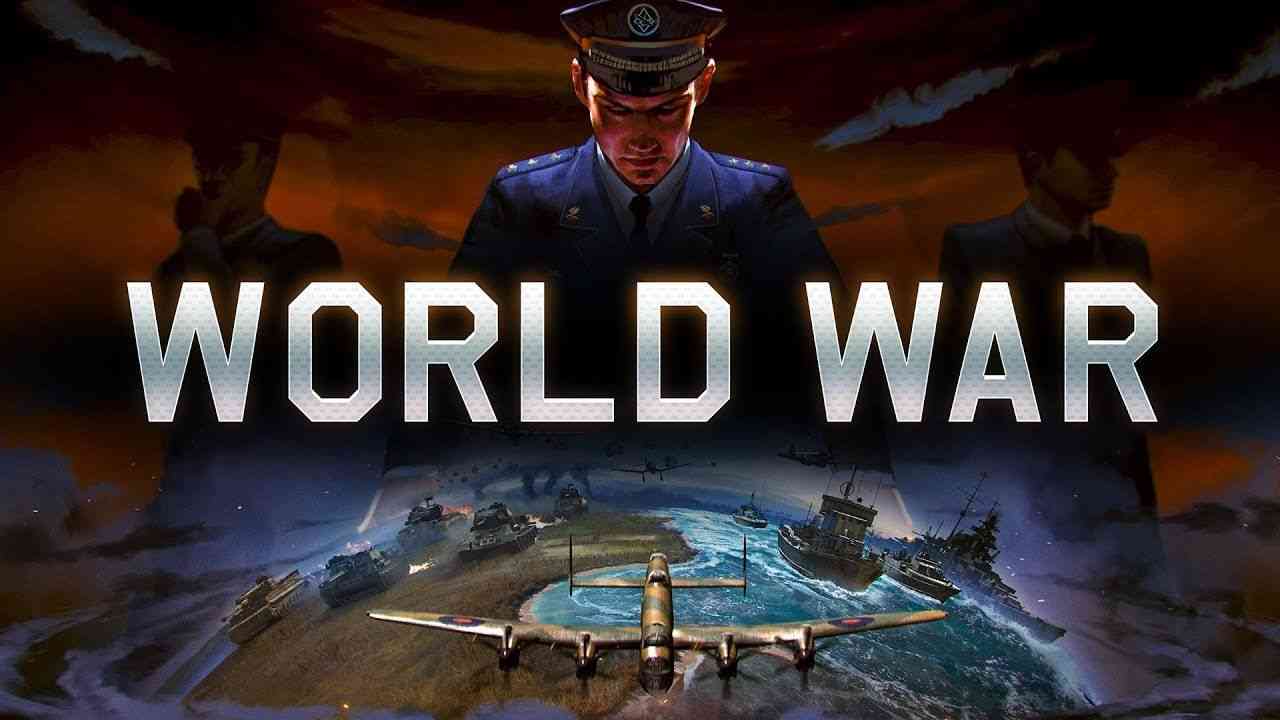 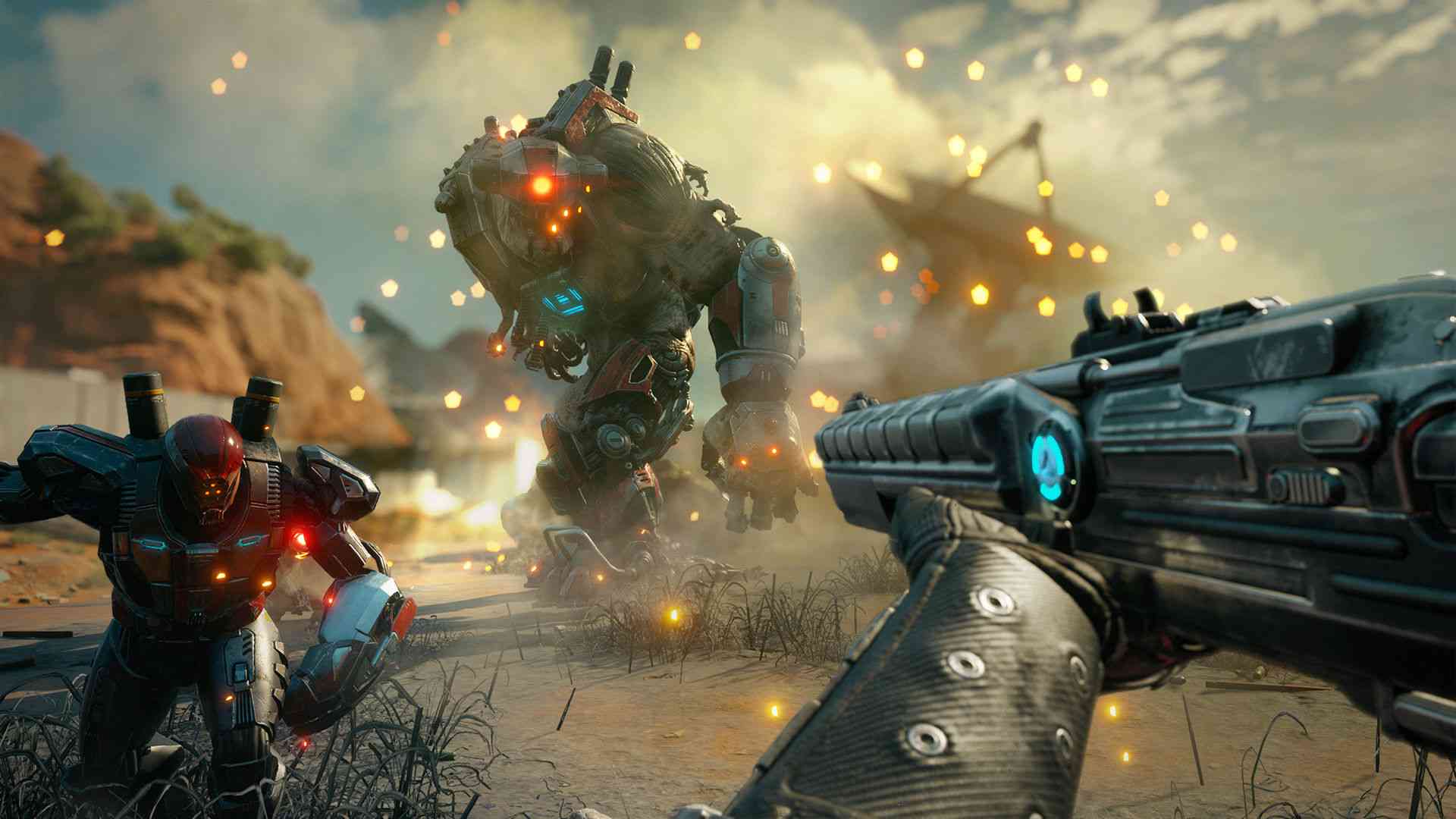 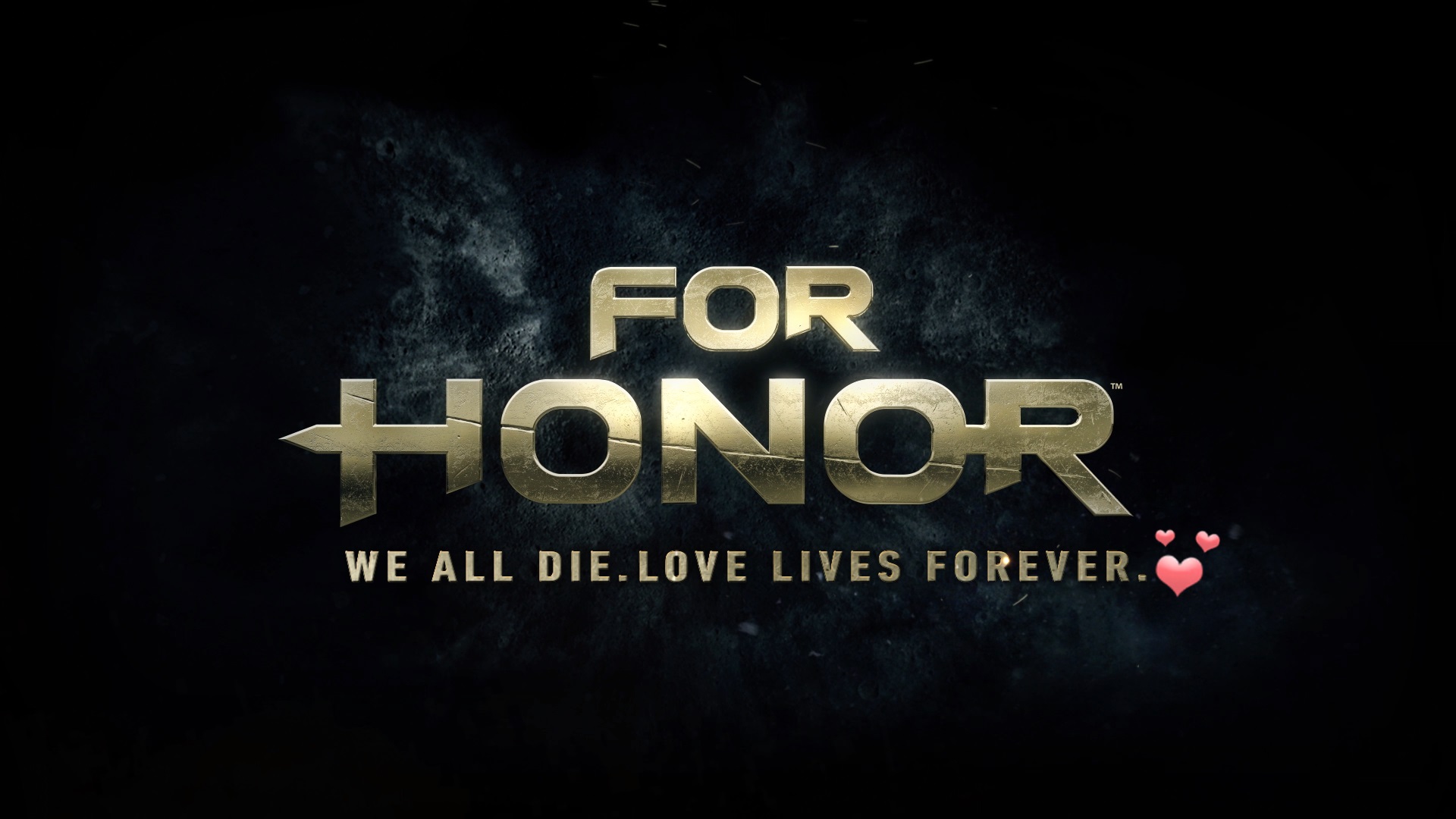