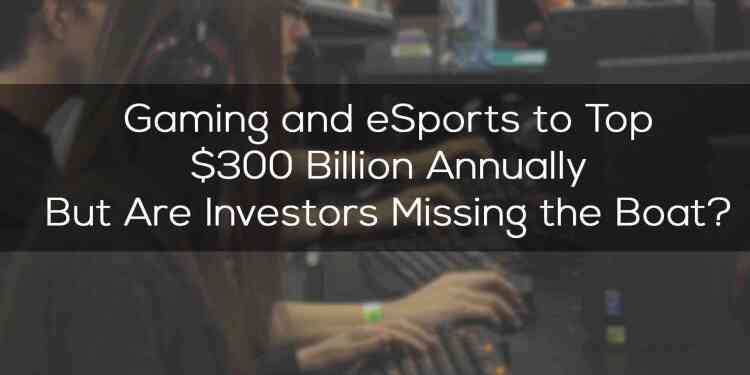 The gaming and eSports industry is on track for $300 billion per year revenue by 2025 and continuing to grow in double digits. But investors seem to be missing the boat as this sector takes flight.

That comes from leading portfolio managers looking at the industry and its huge potential. They point to the fact that investors are “newbs” in this space and lack the experience when it comes to buying into the growing market.

The eGaming industry‘s rapid growth is being driven by exciting innovations such as cloud gaming and online interaction. Companies looking to take the eSports category to the next level include Activision Blizzard Inc. (NASDAQ: ATVI), Take-Two (NASDAQ: TTWO), and NVidia (NASDAQ: NVDA), who all have major investments in the development end of the business.

Other companies are positioning themselves to take advantage of the potential for massive ad revenue derived from the sector. Versus Systems Inc. has already put itself front and center in the esports segment. Versus Systems (CSE: VS) (OTCQB: VRSSF) focuses on advertising and development of in-game promotion and prizing tools. The emerging Vancouver-based company is seeing an influx of gaming companies looking to use their system to tap eSports and eGaming ad revenue.

A Market That Just Can’t Be Ignored

It appears that the eSports trend is more than just bubble. That’s what a prominent portfolio manager discovered at one event in Toronto, Canada. Nick Mersch says it was the giant line for the League of Legends’ semi-finals outside Toronto’s giant Scotiabank Arena that convinced him of the massive opportunity being ignored by many investors.

“The tickets were being resold for more than Leafs tickets,” Mersch is quoted as saying.

In looking at his firm’s figures, he realized the numbers were incredible. They predict combined video game and eSports revenue will hit US$149 billion this year, surpassing the US$140 billion that the traditional sports market is expected to generate.

“To me, it’s one of the most asymmetrically priced risk profiles in a lot of equities right now. Just because there’s not a lot of attention being paid to it,” Mersch said. “There are so many uture monetization possibilities that it just has nowhere to go but up.”

It appears that Mersch has his metrics well researched. Figures reveal that the average NFL fan spends roughly US$60 per year, while the average eSports fan spends only around US$5. That’s a lot of room to grow revenue from an industry that has 700 million active players online and about 1.2 billion playing some form of games.

Versus Plugs in Its WINFINITE Platform to Monetize the Gaming Business

Versus Systems is one of the young, forward-thinking companies expected to benefit from their ability to generate revenue as developers increase their engagement and retention rates of using the WINFINITE platform. The platform will offer viewers and players the chance to play for real world prizes they want, while providing brands and businesses an opportunity to reach clients through a massive online pool of gamers and viewers.

For starters, giant HP, Inc. is on board with Versus. The company has just signed an agreement with Versus and says it will integrate the WINFINITE technology into its products. Versus is powering OMEN Rewards, a real-world prizing platform built into OMEN Command Center and available for download by any Win10 PC via the Windows Store.

Versus also entered agreement with Animoca Brands Corporation Limited that will see the companies transfer shares. Versus Systems will benefit from the broad portfolio of Animoca offerings. That includes games like Crazy Defense Heroes, The Sandbox and Crazy Kings, as well as other intellectual properties like Garfield, Thomas & Friends and Doraemon.

Another early participant in the Versus universe is Ludare Games Group. Versus has already signed a partnership deal with Ludare Games. Ludare has worked with some of the most successful intellectual property in the world – including huge film, television, and gaming properties. Ludare plans to integrate the Versus System platform into its upcoming games, including augmented reality games.

Many Will Look for Winners

Professionals like Mersch, who co-manages a global investors fund, are constantly faced with how to best dive into the sea of gaming opportunities. His firm allocates about 20 per cent of its holdings towards the esports theme. In reviewing the options, they see three types of inoads for investors who want to take part now; publishers, teams and technology.

While publishers and teams offer tremendous direct input to the eSports category, they require a lot of backing and can take a long lead time to realize the revenue.  New games, for instance, can take six years and more and US$500,000 to $1 million to develop traction. Early investors may be more attracted to the technology side as it gains attention from companies creating new ways to monetize and generate revenues that are immediate and scalable.

Large companies are already capitalizing with major inroads in the eGaming industry, including:

Activision Blizzard Inc. (NASDAQ: ATVI) focuses on the development of video games consoles and gaming content for PCs and mobile devices. The game maker showed good progress in its latest earnings release. New content is already trickling out to player communities across Hearthstone, World of Warcraft, and Overwatch, and the player response has been very positive so far.

Take-Two Interactive (NASDAQ: TTWO) which owns video game publishers Rockstar Games and 2K, reported gross profits of $299 million in the first quarter of its fiscal year 2020. The majority of revenue over the period was generated by “recurrent consumer spending” — which includes in-game purchases and add-on content to existing titles — from titles such as Grand Theft Auto Online and Red Dead Redemption 2.

NVidia (NASDAQ: NVDA) just announced an enterprise-grade hybrid cloud on AWS that is optimized for machine learning, AI, and data science workflows. The VMware Cloud on AWS with Nvidia is capable of operating from cloud and on-premise servers and will make it easier to migrate VMware vSphere-based applications to the cloud to accelerate high-performance computing or machine learning for research, experimentation, and deployment in production.

Apple iOS 13 finally makes it possible to use controllers