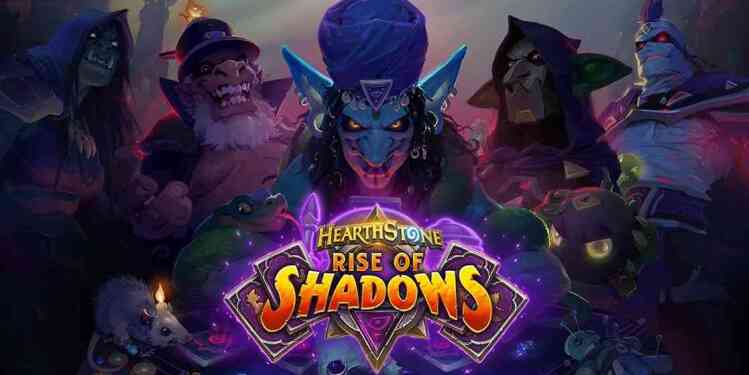 Rise Of Shadows Now Live, Unleashes The League Of E.V.I.L. In Hearthstone

Azeroth’s most notorious villains have joined forces and are planning something nefarious involving the mystical floating city of Dalaran. Today’s launch of Rise of Shadows, the newest expansion for Blizzard Entertainment’s smash-hit free-to-play digital card game Hearthstone, invites players to get in on the action with 135 all-new cards featuring mechanics and keywords expressly designed for doing no good.

This formidable gang of ne’er do wells—led by Arch-Villain Rafaam—has styled itself The League of E.V.I.L., and they’re tired of the indignities they’ve suffered at the hands of Azeroth’s do-gooders. To pull off their brazen deed, they’ve cooked up sinister Schemes—cards that grow in power the longer they remain in-hand—and they won’t think twice to put the spurs to their Lackeys—1/1 minions that make up for their lack of brawn with potent Battlecries.

Unfortunately for them, the Defenders of Dalaran won’t go down without a fight. Wielding mighty Twinspells, which generate a copy of themselves in players’ hands once they’re cast, the Defenders could put a serious damper on the League of E.V.I.L.’s plans.

Rise Of Shadows Now Live, Unleashes The League Of E.V.I.L. In Hearthstone

“With Rise of Shadows, we’re kicking off the biggest story we’ve ever told in Hearthstone and offering players a bunch of wicked new cards to get crafty with,” said J. Allen Brack, president of Blizzard Entertainment. “This expansion also marks the beginning of a brand-new year of Hearthstone content—the Year of the Dragon—and we have a lot more in store for players in 2019.”

Players with a penchant for skullduggery also have a lot to look forward to with the next Hearthstone single-player experience, scheduled to arrive in May. This grand Solo Adventure—the most ambitious Hearthstone has seen yet—will consist of five epic chapters, the first of which will be free to everyone. Subsequent chapters can be unlocked for 700 gold each or purchased as an all-inclusive package for 19.99€/£16,99. Players will earn three Rise of Shadows card packs for every chapter they complete, and more rewards await those who finish all five. Keep an eye on riseofshadows.com for further details.

For a limited time, players who log in to Hearthstone ill get a free copy of Archmage Vargoth*, the wise and powerful Kirin Tor leader. Harnessing fearsome, uncontrollable magic, this four-mana Legendary minion recasts a friendly spell at the end of his controller’s turn, with targets selected randomly. Starting today, players can also begin to complete a series of limited time quests to earn up to 12 card packs—including 5 Rise of Shadows packs. In addition, from April 9 through April 16, players can purchase the Shadow Bundle, containing 9 Rise of Shadows packs and an Arena ticket for 9.99€/£8.99. †

Rise of Shadows is available now for Windows® and Mac® PCs; Windows, iPad®, and Android™ tablets; and iPhone® and Android phones. Card packs can be purchased individually or in discounted bundles from the in-game Shop at the same pricing as all other Hearthstone card packs. Players now have the chance to win Rise of Shadows card packs as quest rewards or prizes in the Arena and can craft cards from the expansion by using Arcane Dust collected from disenchanting unwanted cards.