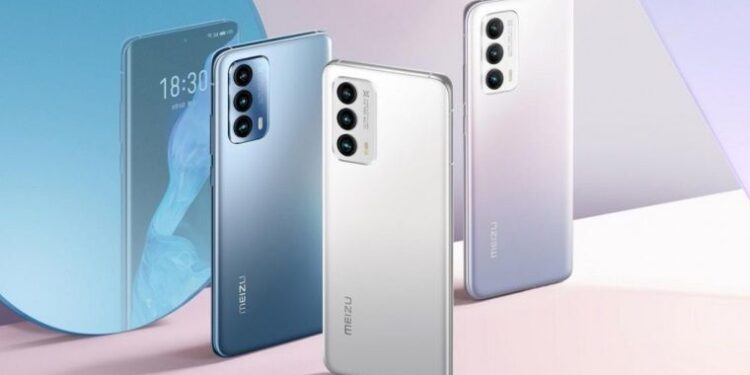 Meizu’s highly anticipated new flagship smartphones Meizu 18 and 18 Pro have been officially introduced. First of all, the Meizu 18 model has a resolution of 1440 x 3200 pixels and a 6.2-inch curved four-sided Super AMOLED display. Also, the panel, which has a refresh rate of 120Hz, allows it to be used comfortably even outdoors with its 420 nit screen brightness. Besides, the device, which incorporates Qualcomm’s ultrasonic under-screen fingerprint technology, supports the HDR10 + standard in addition to 563 PPI pixel density. Furthermore, powered by Qualcomm’s 5 nm Snapdragon 888 chipset, the model is accompanied by 8GB / 12GB LPDDR5 RAM memory and 128GB / 256GB UFS 3.1 storage options. There is no card reader on the device.

The device comes with a triple camera layout that includes a 64MP wide-angle main camera with f / 1.6 aperture, an 8MP resolution telephoto lens, and a 16MP resolution ultra-wide angle sensor. On the front of the device, there is a 20MP selfie camera with an f/2.2 aperture. The 4000 mAh battery, supported by 36W fast charging technology, reaches 40 percent in 15 minutes and full in 50 minutes. The price tags of the 152.4 x 69.2 x 8.2 mm and 162 g weight model are as follows:

In the Meizu 18 Pro model, the segment is a little higher. Also, the device, which will offer a resolution of 1440 x 3200 pixels on its 6.7-inch screen. Besides, comes with the Samsung E4 AMOLED panel. Furthermore,powered by Qualcomm’s 5 nm Snapdragon 888 chipset, the phone is accompanied by eight-core Kryo 680 processor cores. In addition to 8GB / 12GB LPDDR5 RAM memory and 128GB / 256GB UFS 3.1 storage options, the device, which does not allow the use of a microSDXC memory card, comes with the Adreno 660 graphics chip.

The device has a quad-camera layout that includes a 50MP resolution Samsung GN1 main camera. Besides, a 32MP resolution Sony IMX616 ultra-wide-angle lens, an 8MP resolution telephoto camera, and a 3D ToF sensor. Also, all these sensors on the phone, 40W on the device supports connectivity solutions. Such as Wi-Fi 802.11? / B / g / n / ac / 6e, dual-band, Wi-Fi Direct, hotspot, Bluetooth 5.2, A2DP, and LE There is a 4500 mAh battery with wired, 40W wireless, and 10W reverse wireless technology. Furthermore, the device, which comes out of the box with Gray, White, and Blue color options, runs the Android 11-based Flyme 9 operating system. The price tags of the model, which measures 162.5 x 73 x 8.1 mm and weighs 189 g, are as follows:

Finally, do not forget to mention your thoughts about the highly anticipated new smartphones Meizu 18 and Meizu 18 Pro by China-based Meizu in the comments below.