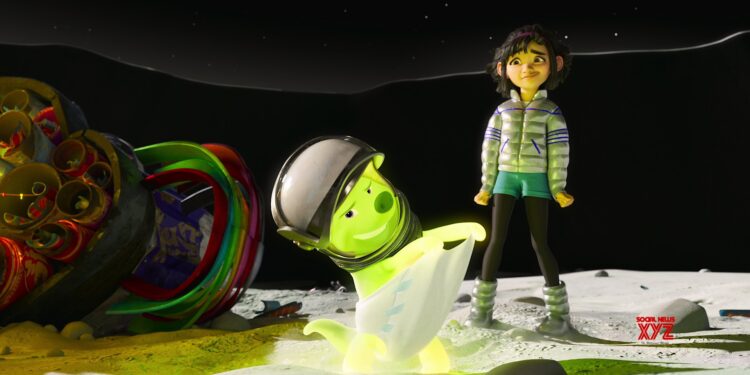 The Netflix animated movie Over The Moon, written by Glen Keane and written by Audrey Wells, has been released.

The Netflix animated movie Over The Moon, written by Glen Keane and written by Audrey Wells, has been released. In the film, the talented Fei Fei, powered by her mother’s memories. So, builds a rocket that she can go to the Moon to prove the existence of the legendary Moon goddess. This dazzling animated musical recreates the ancient Chinese fairy tale of the Moon Goddess with an Oz-like fantasy world.

Directed by master animator Glen Keane, who starred in films such as Beauty and the Beast and the Oscar-winning Kobe Bryant short animated film Dear Basketball, the film produced by Gennie Rim and Peilin Chou. The film’s voice cast includes successful names such as Cathy Ang, Phillipa Soo, Ken Jeong, John Cho, Ruthie Ann Miles, Sandra Oh, Robert G. Chiu, Margaret Cho, and Kimiko Glenn. The production, which has an entirely Asian cast, was the last film of screenwriter Audrey Wells. Wells, who fought cancer during the production phase of the film, passed away at the age of 58.

Netflix Released Over The Moon

The Netflix animated movie Over The Moon, written by Glen Keane and written by Audrey Wells, has been released. Inspired by Chinese mythology in its production, Over The Moon is about the events of a 13-year-old girl named Fei Fei who wants to prove to her father that the legendary Moon Goddess is real. Fei Fei, who dreams of meeting the Moon Goddess. So, plans to embark on a journey to the Moon by building a rocket to prove the existence of the legendary Moon Goddess.

A mix of comedy, musical, and drama, the soundtrack for this animated film composed by Steven Price and sung with songs by Christopher Curtis, Marjorie Duffield, and Helen Park. Co-directed by John Kahrs (The Incredibles) and written by Audrey Wells (The Hate U Give). Over the Moon produced by Pearl Studio behind Abominable. The English voice cast of the musical animation by Glen Keane includes Cathy Ang, Phillipa Soo, and Ken Jeong.