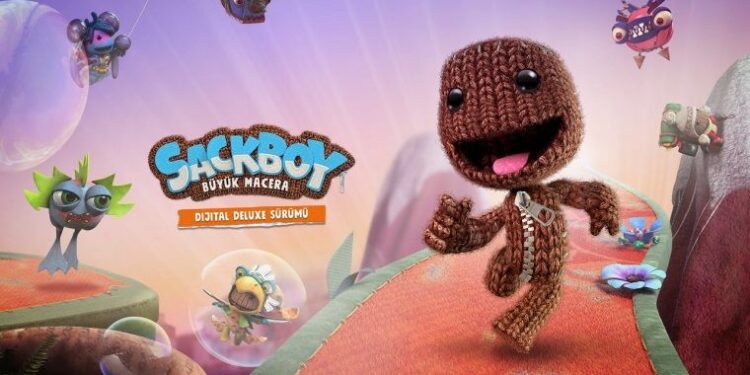 The launch trailer and first review scores of the platform game Sackboy A Big Adventure developed by Sumo Digital have been published. Details are in our news.

Sackboy, our iconic PlayStation hero, returns to breathtaking action with a massive, fun, and frantic 3D multiplayer platform adventure and brand new style. The evil master Vex (a near-legendary being born more or less out of chaos and fear) kidnaps Sackboy’s friends, forcing them to build Upside down. This device, the most deadly and evil thing, seeks to transform the Artworld from a fantasy realm of pure imagination and innocent dreams into a barren and parched nightmare.

With the PlayStation 5’s ultra-fast SSD, the game promises fast load times between episodes, inputs, and in multiplayer mode. In addition, thanks to the tactile feedback feature of our new generation console, it seems to be quite fun to run on wool-like surfaces or platforms. When we look at the average of Metacritic as a result of the examinations, we see that it is 77 points. Out of 13 reviews, 10 of the game scored positive points, and only 3 of them were evaluated as mixed.

You can check out the game’s release trailer and the first review scores below.

Take Sackboy on an epic 3D platforming adventure with your friends.

And here’s what’s going down:

The dastardly Vex (a near-mythical being born of chaos and fear, no less) kidnaps Sackboy’s friends and forces them to build his Topsy Turver.

This most deadly diabolical device will transform Craftworld from a fantastical land of pure imagination and innocent dreams… into a torrid, barren eyesore of nightmares. Ooh the fiend!

But legend tells of a prophecy from deep within the ancient order of the Knitted Knights, Craftworld’s legendary protectors. For only the brave, fearless, chivalrous and, yes, gallant can save the day in an almost too dramatic for words race against time stuffed with danger and peril. So much peril.

Set off alone or with your bravest friends on a whirlwind of capers across the snowiest mountains, the leafiest jungles, the wettest underwater realms and the, uh, spaciest of space colonies.

Take down Vex. Save the sack-folk. Save the day. It’s time to fulfill your destiny, Sackboy. From woolly wonderkid and hessian hero… rise our Knitted Knight.