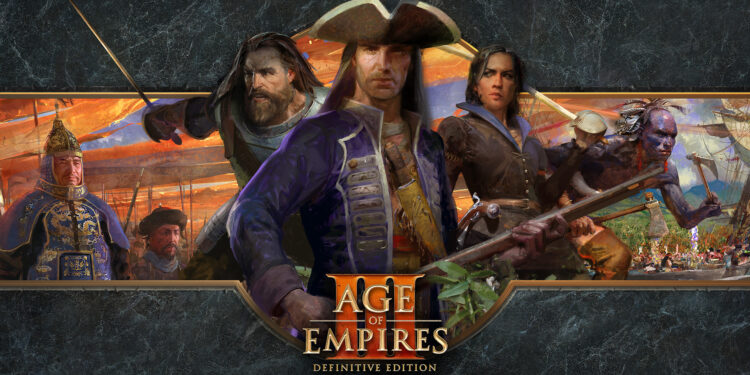 The third game of the legendary Age of Empires series is back with a remastered version.

Thanks to the game, which is mostly visually updated, we find the chance to relive the classic RTS experience. So what is the level of playability of a 15-year-old production by today’s standards? Once you know the details of the game, you can answer this question yourself. Let’s take a closer look at Age of Empires III: Definitive Edition review.

When we want to choose a game model of the Age of Empires III: Definitive Edition that I am reviewing; four options are offered: Story mode, historical battles, skirmish, and multiplayer. All of these options are lined up in more options on the game’s main screen. The story mode appears as an area where three different stories can be played. There are short missions here, each consisting of several episodes, even if we don’t fight long. For tasks that are short to play according to a strategy game, we act by fighting according to the given theme.

Let me tell you a little bit about this story mode if you wish. We follow the adventure of the Black Family in the scenario, which consists of three parts, each of which takes place in a separate period. The first episode takes place at the end of the 16th century. Under the command of Morgan Black, St. Leads the John Knights; We are trying to resist the attack of the army under the command of the Ottoman commander Sahin Bey in our castle, which is located in Malta and is the last castle we have. After fending off this attack, we learn that the Ottoman troops actually had another target; to find the Spring of Youth (the Moon Lake believed to be found in this spring), which is thought to open the door to eternal life.

A secret society called Circle of Ossus is also on the hunt for this resource. Alain Magnan sets off the task of finding this resource before others and sends Morgan Black off to the New World. Sailing to the New World, Morgan finds himself in the Caribbean after the attack of the pirates. Our team, who managed to gather their strength and defeat the pirates who attacked them, finally arrives in the New World. After that, we witness a struggle involving the Ottomans, the Spaniards, and the Aztecs, the natives of the continent.

In the second part, in the mid-18th century, Morgan’s grandson John Black; In the third part, we direct John Black’s grandson and Nathaniel’s daughter, Amelia Black, in 1817, and continue the story. The Definitive Edition includes additional packs of the original game. Therefore, we can also play the scenario missions included in the additional packages. The War Chiefs expands the story of the Black family as The Asian Dynasties; It comes with scenarios of Japan, China, and India.

On the skirmish side, we taste the free combat feature that we often encounter in the Age of Empires games. We can choose our own civilization and other civilizations as we want and spread them on the battlefield as a team. In the combat option, there are two main battle modes. Also, we can adjust the map type, map shape, game rules, starting diameter, difficulty, and game speed. You can take part in battles with the option of fighting as you wish, regardless of any story.

In the option called multiplayer, as the name suggests, we enter an area where we can share our trumps with other players online. Basically, online and LAN options are offered here. While the LAN option is suitable for playing games from the same network, as it can be understood, we can choose 3 basic options in the online section. With these options; We can look at the competitions being played, we can set up a game ourselves, or we can join a game waiting for a player. If you have a friend playing the same production, I can say that this part is much more fun.

What Awaits Us In Renewed Age of Empires III: Definitive Edition?

If we come to the civilizations in the game; Besides Spaniards, British, French, Portuguese, Dutch, Russians, Germans, Ottomans, Chinese, Japanese, Indians, Aztecs, Lakota, and Iroquois, we have two new civilizations exclusive to the Definitive Edition that come with the main game and additional packages; Swedes and Incas. As you can imagine, each nation has its own characteristics and special units, such as the imams of the clergy for the Ottomans and the janissaries of the basic military units.

Since the announcement of Age of Empires III: Definitive Edition, it has been said by Microsoft that an advanced artificial intelligence will be found in this production. To be honest, I could not see such artificial intelligence development. We can still encounter units that try to pass through the enemy’s midst or don’t react when they strayed. Unfortunately, I cannot say that enemy AI is also understandably different. In short, despite the innovations, the question of how satisfactory they are remains unanswered.

How About Graphics, Sounds, and Performance?

I have mentioned above that there are differences between Age of Empires III: Definitive Edition, which I examined visually, and the original version. Unfortunately, I cannot say that these differences have reached impressive dimensions. Also, it is enjoyable to play an Age of Empires game with 4K resolution support. Although Age of Empires III: Definitive Edition does not bother visually, but there are traces of being an old production. I think a more successful result could be made. The fact that the visual works not noticed in the animations of the units can see as a deficiency. In short, apart from the menus and the interface, no significant visual impact felt in this renovated production.

I can say that the sounds of the game do not make a similar difference. However, I do not have a big objection to this issue. As for the sounds, the Age of Empires III game was successful in my opinion, I can say that the same success was maintained. I cannot say that the performance of the game is also troublesome. There are some problems with some camera transitions, but I did not encounter any significant performance problems during the battles. Depending on the hardware features of computers, different results may be experienced in performances. For this reason, I do not want to make a clear assessment of performance.

On the other hand, let me say that you can make enough graphics settings according to the power of your hardware. In this production; we can make basic settings such as resolution, window mode, supersampling. While you can also rate the particle quality; We can turn details such as spectator effects, dynamic lights, clouds, glare effect, SSAO on and off. With all of these; We also have the opportunity to determine the quality level of settings such as greenery, shading, water, shadows, textures. Thanks to all these settings, we can choose a way for us to reach the best performance according to the technical specifications of the computer we use.

Conclusion: Is Age of Empires III: Definitive Edition Worth Buying?