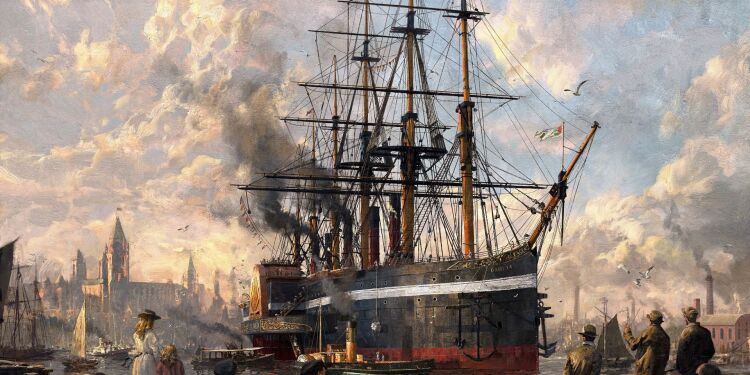 Anno 1800 Review: "We are at the heart of the Industrial Revolution". Simulation style PC game, Anno 1800 from Blue Byte Software and Ubisoft.

Anno series, which is one of the most well-established strategy series of the game world, has taken us to the future and even to the space in the last two games. Even though Anno 1800 is highly anticipated by the fans of the series, losing its authentic atmosphere in previous games had reduced the interest in the Anno series over time. Ubisoft is aware of this situation and this time brings us back to the beginning of the 19th century, to the Industrial Revolution.

In this game, we start our journey as an agricultural colony and develop in time to reach the golden age of industrialism. First of all, I need to mention that Anno 1800 is not exactly a Tycoon game. The game contains a considerable amount of war and diplomacy elements, but the crucial parts are trade connections and city-building features. It will be easy to adapt Anno 1800’s mechanics if you have played series like Cities: Skylines, SimCity and Tropico. And Anno 1800 is even more understandable and simpler than these games in many ways.

Anno 1800 has two different game modes. In the story mode, players take on the remaining debt from their ‘’fathers’’ and deported from the city where they were living to settle on an island and pay the debt back. In general, we take missions and tasks to repay our debt by producing agricultural or industrial products. The dialogues we encounter during this mode is quite successful and have positive impact on the atmosphere of the game, especially compared to the other Tycoon games in the market.

Sandbox mode is the main mode of the game, and probably many of us are interested. In this mode, we have our own city in a map of different island countries, and we have options such as trade, diplomacy and war with other states. Because there isn’t any story in this mode, it allows you to act completely free and provide a better option for the players who wants to play Anno 1800 for a longer period. I would recommend the sandbox mode, which we start as an agricultural country and develop into an industrial one. On the other hand, you can start with the story mode in order to learn the game’s mechanics.

Graphically, Ubisoft has always developed the Anno series to be assertive in the Tycoon and strategy genre. Anno 1800 seems to prove this claim, because the game’s visual quality is striking. Environmental details, lighting, coatings, everything looks fine. However, the most noticeable feature is the details of the game. When you build your city, you can feel that the city is alive. We felt the lack of this situation in games like Cities: Skylines and Tropico, but Anno 1800 manages to give you the feeling that the city you are building is full of life. I can only say that the only deficiency is the day and night cycle. However, the developers said that the day and night cycle will be added to the game later. In short, the game looks pretty nice.

Another striking point of Anno 1880 is the quality of sound, music and dialogues. Also, the ambience voices are well-made and gives you the general mood of the city. We can observe Ubisoft’s art management and usage in almost every game. Anno 1800 has done a great job in this regard. During the game you can zoom in to the festivals and enjoy the choir and music, which are carefully prepared.

The production chain element we know from Tycoon games is nicely implemented and explained in Anno 1800. For example, it is shown that you first need to make pig farm and slaughterhouse to produce soap. When you build the required structures, you can easily understand that you are now ready to start the chain production of that product. In other tycoon games, as these requirements were not clearly introduced to the player, players could have difficulty understanding the basic items of the product they wanted to produce.

Of course, to meet all the needs of your city, one island is not enough. For example, some herbs that you need to plant for the beer production (needed by working class) may not grow in your island. You have to grow this product and carry it to your island with the help of your ships. Otherwise, you can’t meet the need of happiness of the working class and their working rate declines, or they can even move out of your island.

The basic logic of the game is based on these classes, so you need to focus a little more on the class system. The houses you build to increase the population of your city are farmer houses and can be upgraded to working class houses and craftsman houses when their population increases over time. However, you need to keep the balance between classes and their shelters to keep your city alive and stay in a self-sufficient city. If you upgrade all the workers to the working class, your city will have a shortage of farmers and you will not be able to meet basic needs such as food. This means that you either need to import these products or stay hungry. Therefore, you should always support agriculture, otherwise the prices will increase dramatically in no time.

Long story short, Anno 1800 is a successful game, both visually and mechanically. In addition to the city administration, diplomacy and light combat mechanics will meet the expectations of the players who love this genre. On the other hand, if you are also familiar with tycoon games, such as Cities: Skylines, Anno 1800 will keep you busy for a while.