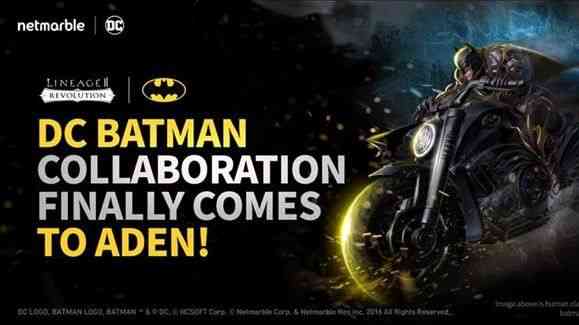 Following the game’s incredible success in South Korea and Asian territories, Lineage 2: Revolution was launched in 56 countries across North America, Europe, Oceania and the Middle East in November 2017. One year later, the game continues to be one of the most popular mobile MMORPGs due to its groundbreaking fantasy elements that bring top-quality visuals, a massive open-world and large-scale PvP battles to life. The game has also accumulated more than 30 million registered players around the world.

Further enhancing gameplay, the collaboration with Warner Bros. Interactive Entertainment and DC will bring iconic Batman elements to Lineage 2: Revolution, granting players new opportunities for exciting interactions in open-world combat.
All Batman-themed content is available for a limited time only and includes the following additions:

Batman Costumes and Mounts
Characters from the Batman family will make their way into the world of Lineage 2: Revolution with designated Batman character costumes for each of the five in-game races:

Five new Batman-themed mounts and ten weapon costumes will also accompany each of the character costumes.Batman Dungeon and BossesSelect Batman characters will be presented as bosses and also appear in the new Temporal Rift Dungeon “Castle of Terror.”  Poison Ivy and Bane will appear as boss monsters in “Castle of Terror”, while the Riddler and Scarecrow will be added in the near future as Field Boss and World Boss, respectively.Additional ElementsBonus Batman-themed features include:

Lineage 2: Revolution is available on iOS and Android.

War Thunder gets Mouse & Keyboard support on Xbox One