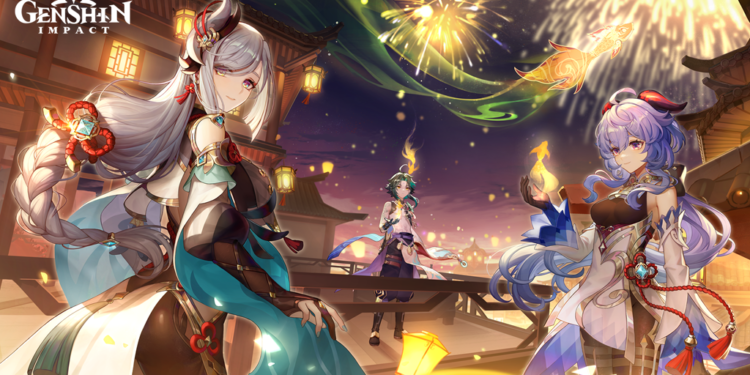 miHoYo announced today that Genshin Impact Next Update Version 2.4, “Fleeting Colors in Flight,” will be coming soon on January 5. Liyue’s biggest annual festival, the Lantern Rite, will be held once again, bringing back rich rewards, the chance to obtain a free four-star Liyue character, and even the Jade Chamber that was destroyed in the past Archon Quest. In addition, the first version update of 2022 will unveil Enkanomiya, the remains of an underwater nation that has been sealed away for thousands of years beneath Inazuma.

Genshin Impact is a free-to-play open-world action RPG that brings players to the visually stunning world of Teyvat. The player takes on the role of the mysterious “Traveler,” who sets off on a journey to discover the fate of their lost sibling and unveils the mysterious secrets of Teyvat along the way.

Currently, players can explore Mondstadt, Liyue Harbor, and Inazuma, three of the seven major cities in Teyvat, each with unique cultures, stories, and vast regions, and offering a diversity of creatures, monsters, secrets, and hidden treasures for players to discover. Further cities, stories, characters, and seasonal events will be released as the game progresses!

Unlike the other islands in Inazuma, Enkanomiya is a huge floating island located beneath the ocean, constantly eroded by the Abyss. Ancestors of the people of Watatsumi Island once lived there, leaving the ruins of an ancient civilization that are older than any other relics found on land.

Without day and night underground, players will find a way to use Dainichi Mikoshi, the artificial sun developed by the ancient civilization, as they delve into the puzzles and depths of Enkanomiya.

Dangerous enemies also await in the unknown new area. Living in the dark waters of Enkanomiya, Bathysmal Vishaps are cunning social predators who can hunt together and take advantage of their surroundings in combat. More enemies also show up from the Abyss. The Abyss Lector: Fathomless Flames can unleash Pyro attacks that deal delayed bursts of damage regardless if characters are shielded or not.

To confront the challenges, players can team up with more reliable companions. The two new playable characters joining at the start of Genshin Impact Next Update Version 2.4 are both polearm users and reliable supports to the team. The new five-star character Shenhe not only wields the power of Cryo herself but also increases the Cryo damage dealt by her teammates. Her Elemental Skill can also boost either nearby party members’ Elemental Skill and Elemental Burst damage, or their Normal, Plunging, and Charged Attack damage.

The four-star character Yun Jin owns a Geo Vision, and she can buff her teammates’ Normal Attacks based on her Defense and the variety of Visions in the player’s party. As an opera master, Yun Jin’s opera performance will be voiced by a professional Peking Opera Artist, while her daily-life dialogues will be delivered by voice actors in different languages. Players may also recruit Xiao, Ganyu, and Zhongli in their own Event Wishes during the upcoming version.

As the world of Teyvat sees its own new year arrive in Genshin Impact Next Update Version 2.4, Liyue Harbor will once again be packed with games, stalls, vendors, and all sorts of festivities to celebrate the Lantern Rite. In this year, the Traveler can also pitch in to help Ningguang and the locals rebuild the Jade Chamber. Meanwhile, rich rewards including 10 Intertwined Fates, a chance to get one of the eight free four-star Liyue characters, and Ningguang’s new outfit Orchid’s Evening Gown can be obtained in the latest seasonal events. Keqing’s new outfit Opulent Splendor will also be on sale with a limited-time discount.

Genshin Impact Next Update Version 2.4 update will be arriving on January 5, 2022. With the cross-save function, players can now continue their adventure across PlayStation®, PC, and mobile. The game is available for download on PS4 and PS5 from the PlayStation™Store, on Android from Google Play, on iOS from the App Store, and on PC from Epic Games Store or the Genshin Impact official website.