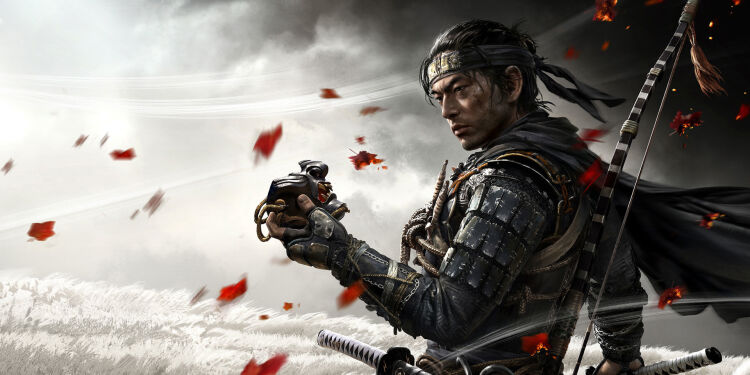 Productions based on the Far East atmosphere have always attracted the attention of gamers. When the samurai sword is involved in both movies and games, they are indisputable. The subjects, action, and upright stance that addressed that period do not lose their importance even after years. Here is Ghost of Tsushima specially produced for Playstation 4, a production that includes all these elements. How successful is it in handling these factors? Let’s take a look together our Ghost of Tsushima Review.

Ghost of Tsushima focuses on the Mongol raids in 1274 and Tsushima residents who tried to resist these raids. In the game, we control a character named Jin Sakai, who is the last member of the Sakai clan. He struggles against the first raids with the island’s Shogun, his uncle, who is the leader, but the samurai suffer a heavy defeat in this war. We can not prevent Mongol troops from spreading to Tsushima Island, such as the Orcs spreading to the bottom of the Helmet. Moreover, our uncle is captured after this war, and we barely save our lives. Afterwards, we become the centre of a guerrilla attack against the Mongols and witness how the character turns into Ghost.

At this point, I would like to open a parenthesis for the handling of Mongolian troops. The Mongols, of course, are portrayed as a brutal and war-faced nation. But despite these brutalities, they were not treated as stupid in the game. I have to say that I especially love Khotun Han scenes. The character is treated as a brutal but logical person. Although this situation does not deepen it, I can say that it is far from being a shallow character.

First of all, I would like to talk about the world of the game because the Ghost of Tsushima’s most dominant aspect is definitely its world. Tsushima Island, located between South Korea and Japan, has been reflected in the game very well. This island, which is handled in accordance with its original form, has scenes like painting in every aspect. We see that the island is divided into 3 parts depending on the story. As we move to the North, there are also elements such as dynamic weather on the island where strong winds and a colder climate meet us. When the dynamic transfer of air is added to the transfer of the island in such a beautiful way. I can say that a world of pleasure to travel and explore has come out.

What about the gameplay?

Yes, its surroundings are among the main dynamics of Ghost of Tsushima. You can find meditation areas and buy different headbands or you can raise your life bar as well as soften your hatch thanks to hot saunas. As you try to raise your perseverance bar with bamboo practice, you increase the evil eye slots by visiting the altars guided by the foxes. You can earn some bonuses in attacking, defending, and similar subjects by attaching the evil eye that you can reach with missions and dynamics of discovery. Do not forget to caress the head of the foxes that guide you when it comes to its place, the animals make an effort.

Apart from the main task, I can say that there are many extras in the world of the game. However, this process repeats itself especially in the first stage of the game. Already the main task structure and the tasks like cleaning the Mongols captured are very similar. You clear the areas captured throughout the game and you encounter the same scenes after each prisoner you save. It is imperative that we watch the same scenes both in the task and in this process. So it is hard to understand why we cannot pass or why this forced attitude continues even in the simplest parts.

Let’s come to the most important aspect of a sword-themed game, the fighting system. The fighting system of Ghost of Tsushima is divided into two in general. Someone has to go face-to-face with your opponents by going through the Samurai road. The other one is the privacy factor, the Ghost path. First of all, let’s talk about privacy users. This part is very important in terms of story and gameplay. I will give you a lot of details about the story and of course, I will not spoil the story for you.

You use the elevations around, the grasses that spread all over the island, and you try to take down your opponents. I can say that the privacy factor, which has a separate functioning from the Samurai road, works properly with its general lines, especially in the parts where you are free. So it is up to you whether you are going to solve the event confidentially or head to head.

It points out where you need to progress secretly. this situation proceeds in the form of a little blind eye and finger. It is very difficult to say that there is artificial intelligence in the freelance structure. But if you need to proceed confidentially in terms of the story, this situation is much more. You feel as if the enemies are on your route with their backs facing you to kill them easily.

Light and heavy attack systems used in the action part of the game. You perform light attacks with the square button and heavier attacks with the triangle tip. In head-to-head battles, you first enter the event with a short duel sequence. Then you have to dive whatever God has given. The point that enhances the fighting system of the game is the opening of the postures.

As you progress in the game, you unlock new postures. Each stance has added to the game according to different enemy types. You use the stone stance against enemies who use swords, shield the water stance, and use the wind stance with a spear. The moon stance is running to your aid in enemies like Izbandut. If you use the wrong stance against the wrong enemy, it becomes harder to overthrow them. Therefore, you constantly change your stance on the battlefield and attack the enemy accordingly.

As I mentioned at the beginning, the fight system, which is shallow in the first place, becomes more enjoyable with the opening of all postures. Moreover, you can unlock new abilities with the experience points you earn for each posture. These abilities cause you to master that posture and create better combos. You also unlock special moves, such as stealing, anger dancing. Apart from all these features, there are some surprise attacks, but I am not telling them to enjoy it.

There are many attacks in the game that you can use except your sword and arrow. Different items such as kunai, gunpowder bomb, sticky bomb, and smoke bomb are also available. Using these items, it is also possible to take different actions in moments of fighting. Especially by throwing smoke bombs, stunning the enemy, and making assassination strikes are quite pleasant. Apart from these, items such as wind chimes and claws that we use in the privacy sections and draw the attention of the enemy in different directions are also in the game. As with postures, you can make updates to these items and your ghost features. Techniques such as multiple assassinations are of great importance both visually and for convenience in the later stages of the game.

The graphics of the game are among the factors that make the Ghost of Tsushima world so valuable. Although it has open-world gameplay, I must say that the game looks pretty good visually. The wind element that integrates with the gameplay or the notes you play against the sunset will take you to different realms. This success in the graphics and the dominance of the artistic aspect of the period enabled Ghost of Tsushima to create a unique structure. Watching the progress of the wind dancing in the vast meadows really starts to give you pleasure. Moreover, as you discover new areas and move north of the map, you are gradually witnessing how different the playgrounds are.

Another point I should mention in the graphics is the character armour. No matter how sloppy the NPC characters are, you can see that the main and some side characters are carefully studied. Each corner of the armour you wear has a separate detail. This situation has brought the well-functioning armour system to a higher level visually. When we look at the music of Ghost of Tsushima, we feel the weight of the wind and percussion instruments. While you go on a quiet journey with wind instruments in normal times, you encounter different melodies in the moments of action.

Finally, I should also mention the Japanese language support and Kurosawa mode. I played the whole game with a Japanese voiceover. I find the game quite successful in this regard. In fact, the English language option now seems so distant to me. So that I can say that this preference has taken place in my head. Playing the game in Japanese is really a big plus for me. The Kurosawa mode, which allows you to play the game in black and white, has transferred to the game exclusively for the famous director Akira Kurosawa. Ghost of Tsushima, which already has duels and scenes that do not find Samurai movies in general, also offers a different experience with this model.