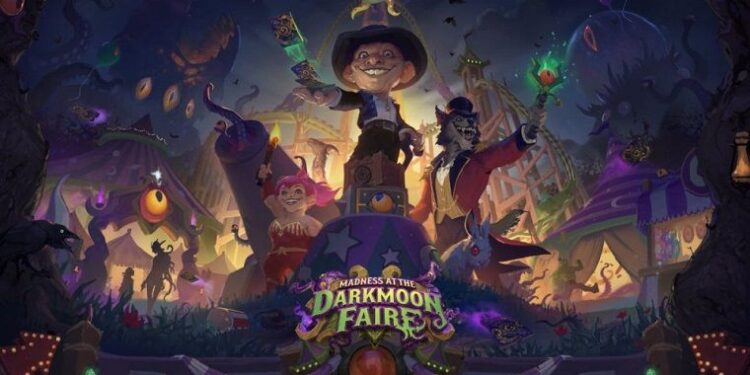 With the new expansion, Madness At The Darkmoon Faire, the ancient gods are returning, bringing with them 135 new cards that they corrupt with their eternal power. Details are in our news.

With the new expansion, Madness At The Darkmoon Faire, the ancient gods are returning, bringing with them 135 new cards that they corrupt with their eternal power. Azeroth’s famous traveling carnival is brought to your liking with the Madness At The Darkmoon Faire. A new expansion pack for Blizzard’s popular free digital card game. However, there is one point to keep in mind for anyone who wants to enjoy this stunning experience. Ancient deities, whose eternal powers are haunting the fairground, are planning to entice the players with 135 brand new cards. They corrupt with their terrifying powers.

First introduced in 2016 with the beloved expansion pack The Whispers of the Ancient Gods. The ancient deities are ready to showcase their game-changing powers as new legendary cards in the Madness At The Darkmoon Faire. In addition to C’Thun, N’Zoth, Y’Shaarj, and Yogg-Saron’s minion cards, players will also benefit from the power of the Ancient Divine Relics. These powerful spells will bring the terrifying effects of the Whispers of the Ancient Gods back to light. Players looking to gain more advantage over their opponents will be able to add new Corruption-effect cards to their decks. These cards get stronger when you play a higher value card in your hand.

“The ancient gods also pioneered some truly incredible decks when they first came into the game. We welcome them back with the Madness At The Darkmoon Faire,” Blizzard Entertainment Chairman J. Allen Brack said, “Also, the first season of Hearthstone Duels, we are very excited to launch it. We are hopeful to see early access players having a lot of fun playing. Also, we look forward to seeing how it will evolve as it is now open to everyone. ”

Starting its first season today, Hearthstone Duels is brand new. Also, completely free game mode that combines the PVP excitement of the arena with the never-predictable and often overdone deck-building experience of single-player adventures. Duels offer players the chance to create starter decks using their own collections. Later, after each match, these decks can be strengthened with additional cards and game-changing treasures.

Each season, the list of cards that can be used in Duels will be updated with a selection from Hearthstone’s rich card sets. Additionally, these changes will be accompanied by new heroes, hero powers, and treasures. The theme for the release season will be Wizard Duels, which will feature instructors and scholars from the Scholomance Academy expansion pack.

Players can also try out the Hearthstone Duels Heroic mode, competing for in-game rewards such as gold, cards, card packs, and magic dust. Duels will be accessible to Hero mode with 150 Gold or an inn ticket for €1.99. The better the performance of the player at the end of the series, the better the rewards will be.

Hearthstone recently launched the Reward Track, which offers players in-game gold, cards, card packs, cosmetic content, and more. There is a free route open to all players, as well as one more way players can unlock by purchasing the Han Card for €19.99. When you purchase the Han Card at any point in the expansion pack, you will instantly receive the golden Silas Darkmoon legendary card. Furthermore, an XP boost for the duration of the expansion, and all toll road rewards up to your current level. Tracking the Han Card track will also allow you to unlock the following content. Such as Annhylde alternate warrior hero and card back, three Jaina hero skins, three Thrall hero skins, and Hearthstone’s first collectible cosmetic coin.