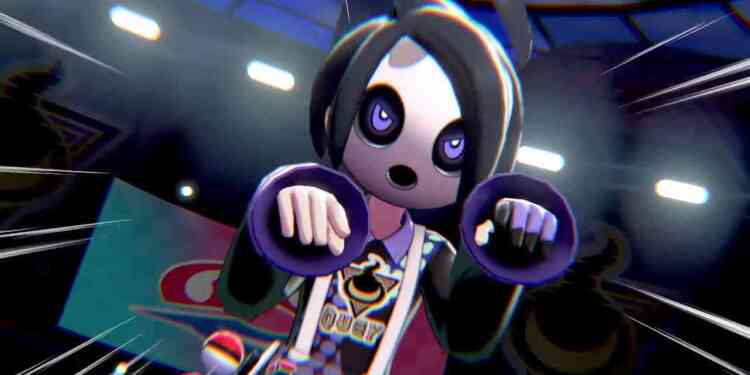 The power of Gigantamaxing has allowed Drednaw to stand on its hind legs and become bipedal. From its standing position, it can come crashing down on opposing Pokémon and crush them with its massive body. Drednaw normally keeps its neck retracted within its shell, but when it attacks, it can rapidly shoot its neck out. Its jaws are also incredibly strong and can easily bite through huge metal towers. The strength of its jaws combined with the force of its neck gives Drednaw the power to punch a hole through a rocky mountain in a single strike. Water-type moves used by Gigantamax Drednaw will change to G-Max Stonesurge. G-Max Stonesurge doesn’t just deal damage to anopponent—it will scatter sharp rocks around the opponent and cause Pokémon entering the battlefield to take damage.

Corviknight uses its massive wings to catch updrafts created by Gigantamax energy to hover in the air while it battles. The armor on its body has been reinforced, so attacks from Pokémon on the ground barely have any effect. Gigantamax energy has caused the armor covering Corviknight’s wings to separate and become blade birds, capable of flying independently. Flying-type moves used by Gigantamax Corviknight will change to G-Max Wind Rage, which removes any effects of moves like Reflect, Light Screen, Spikes, and Electric Terrain that the opponents may have.

Alcremie can produce whipped cream, which becomes richer the happier Alcremie is feeling. Desserts made using this cream are invariably delicious, so many pastry chefs strive to have an Alcremie as their partner. When attacked by an opponent, Alcremie will throw sweet-scented cream to distract them or temporarily blind them, giving itself time to escape.

The cream pouring out of its body hardens when subjected to impacts—the stronger the impact, the harder it becomes—giving Alcremie an impressive resistance to physical attacks. Additionally, the giant “Berry” decorations on Alcremie’s body are as hard as diamonds, and it’s said that most attacks won’t even be able to leave a scratch. Alcremie will launch high-calorie cream missiles around itself to attack its opponents. Any Pokémon that touches this cream will be filled with energy and euphoria but at the same time will fall into a state of complete confusion. Fairy-type moves used by Gigantamax Alcremie will change to G-Max Finale, which will heal all Pokémon on Alcremie’s side while dealing damage to an opponent.

Yamper tends to be drawn tothings that are moving quickly. It can chase after people, Pokémon, or even vehicles. It has an organ in its body that generates electricity, and it’s activated when Yamper runs around. Yamper can’t store the electricity it generates, so it’s often seen running around with electric sparks crackling around it. Yamper’s Ability, Ball Fetch, is a new Ability that comes into play when the Trainer throws a Poké Ball at a wild Pokémon but fails to catch it. If Yamper isn’t holding an item, it will fetch the first Poké Ball that failed to catch the Pokémon, regardless of what type of Poké Ball it is.

Rolycoly’s red eye can illuminate dark areas, while it uses the lump of coal attached to its body like a wheel to move through coal mines and caves. It is able to travel smoothly even over rough terrain. Until about one hundred years ago, every household in the Galar region had a Rolycoly. The families would use the coal that dropped off its body for cooking and heating their homes. Rolycoly’s Ability, Steam Engine, is a new Ability that provides a Speed stat boost if it’s hit with a Fire- or Water-type move during battle.

Duraludon live in caves and mountainous areas. Their two arms have slightly different shapes, and they use them to grind down rock surfaces for food. Its body is composed of incredibly durable metal but is also surprisingly light, so Duraludon can move quite quickly despite its appearance. Its body is susceptible to corrosion, however, and is known to rust easily. They share their habitat with Tyranitar, so these two Pokémon are often seen battling each other in the mountains of the Galar region.

In the Galar region, where Pokémon battles are big entertainment, the region’s Pokémon League holds tournaments to determine the next Pokémon Champion. Players will have to compete with their rivals and challenge the Gym Leaders of the region for their chance to take part in this tournament.

The Gym Challenge is a true celebration of Pokémon battling. Participating Traiers strive to collect all eight Gym Badges, and only Pokémon Trainers who have been endorsed by specific people, such as Gym Leaders, can join. During the Gym Challenge, each challenger wears a special uniform for the occasion. Trainers can choose the combination of three numbers on their own uniform.

People of the Galar Region

Leon – Leon is the strongest Trainer in the Galar region, and he won the Championship in his first-ever Gym Challenge—without being defeated in battle a single time. To this day, his winning streak continues to grow, and his formidable talent for Pokémon battles is unmatched. He’s aided in his countless victories by his partner Charizard, and he’s known to go all out during battles, no matter who he’s facing. His battle style has captured the hearts of the people of Galar.

Oleana – Oleana is Chairman Rose’s secretary and is known for her calm and collected personality. She also serves as the vice president of Rose’s company and is largely in charge of the day-to-day running of the company.

Bea – Bea is a prodigy in Galar karate, carrying on its century-old traditions and techniques. Known for her stoicism and rarely showing her emotions, Bea is also an expert on Fighting-type Pokémon. Her battle style remains very precise even when she’s backed into a corner.

Allister – Allister is a talented Trainer of Ghost-type Pokémon who has taken on the mantle of the Ghost-type Gym Leader at a young age. He’s extremely shy and fearful, and he always hides his face with a mask when around other people. Alister rarely makes public appearances and apparently spends most of his time around ruins or in cemeteries.

Certain towns in the Galar region will have different Gyms that Trainers can challenge depending on whether they’re playing Pokémon Sword or Pokémon Shield. In Pokémon Sword, they will face down Bea, while in Pokémon Shield, they can test their skills against Allister.

As a special bonus for purchasing the Dual Pack SteelBook Edition, Trainers will receive two codes (one per game) that will reward them with special items known as Dynamax Crystals. By using the Dynamax Crystals in the Wild Area, Trainers will be able to face Dynamax Larvitar and Dynamax Jangmo-o, Pokémon that are normally encountered later in the game, in special Max Raid Battles. Larvitar won’t appear in Pokémon Sword and Jangmo-o won’t appear in Pokémon Shield during normal gameplay, but players will be able to catch them in either version by using these Dynamax Crystals.