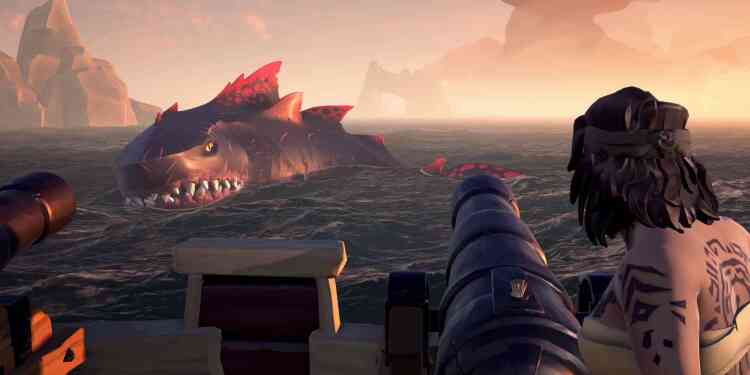 Sea of Thieves celebrates the holiday season with Gilded Gifts

Sea of Thieves is marking the 2018 holiday season with Gilded Gifts, running from December 12th until the first week of January. This cosy festive update serves as an addition to the current major update, Shrouded Spoils, and adds a charming festive appearance to Sea of Thieves’ pirate paradise.

Expanding the Shrouded Spoils content update with a festive present for every pirate.

Gilded Gifts brings a present for each and every pirate who sails the seas during this time. Framed as a gift from the legendary Pirate Lord, players are given the choice of four advanced and extremely lucrative voyages, but may choose only one.

Gilded Voyages pose a substantial challenge and must be completed in one sitting, so pirates should decide carefully when to embark upon their voyage after collecting it from Duke in any of the Outpost taverns. Each of these voyages is associated with one of the in-game Trading Companies, and completing one will give crews a bigger boost to their gold and reputation than a standard voyage.

So for Sea of Thieves‘ first holiday season, the Pirate Lord and the team at Rare invite players to enjoy the festive ambience as they set off on their very own Gilded Voyage, navigating all the new features and dangers introduced by Shrouded Spoils!

The rolling sea fog is a star feature of the Shrouded Spoils update, causing once-familiar territory to turn treacherous – especially in the event of an ambush by rival crews or an encounter with a Kraken, Megalodon or Skeleton Ship.

Those skeletal hordes are on the warpath, infesting more of the previously derelict island forts to pose brand new land-based challenges, while sea battles have spread to the volcanic Devil’s Roar region introduced in the previous update, Forsaken Shores.

The terrifying Kraken is learning new tricks too, while the Megalodon menace introduced way back in The Hungering Deep has multiplied as the whole family arrives to snack on unwary pirates. On the bright side, sea monsters now drop prime loot when defeated by fearless crews.

More spoils can be found beneath the waves by shattering Mermaid Statues to release their Gems, which can be cashed in with any Trading Company, providing a new route to becoming Legendary. It’s only fitting that another feature of the Shrouded Spoils update is expanded ship customisation, covering capstans, ship’s wheels and cannons and giving players even more ways to express their personal pirate story.

All of these features are permanent additions to the game and will remain in play even after Shrouded Spoils ends its run. The only time-limited feature of this update is the traditional set of exclusive cosmetics to be earned, in this case the Wailing Barnacle set.