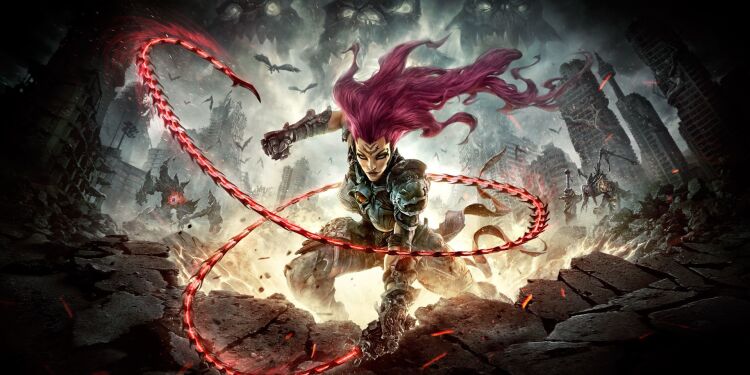 We were wondering whether the Darksiders series would continue after THQ went down. The answer is yes and here is our Darksiders 3 review.

Darksiders 3, developed by Gunfire Games, finally debuted. One of the series which the players wondered whether the game would continue after THQ went down, let’s see what the Darksiders has given us in the hands of THQ Nordic and what has it been able to offer? So here is our Darksiders 3 review.

Darksiders is a series about the story of the Four Horsemen of the Apocalypse. In the first game, the players who were playing in the role of War character was trying to prove his innocence. War came to earth before the seals were broken, the apocalypse that came with him had brought the end of mankind. The game ended with one of the most beautiful endings I’ve ever seen and my love for Darksiders started to blossom.

A few years later, Darksiders 2 made its debut with the lead character Death from the Four Horsemen of the Apocalypse. A much crueller, faster character was offered to us as the main character. Death believed that his brother, War, was being wronged, for which he had gone on a journey from the Tree of Life to the Land of the Dead. The game was perhaps better than the first game, but it had many features that undermined the game.

And on November 27th, 2018, Darksiders 3 released for PC, PlayStation 4 and Xbox One. This time, we are playing the game as Fury from the Four Horsemen of the Apocalypse. Did the game succeed to satisfy us? Both yes and no. Let’s try to find the answer in our Darksiders 3 review.

In Darksiders 3, our story begins in such a simple way. We are travelling on earth with Watcher, which is given to us by the council (it looks like Watcher in the first game, but it is more respectful and useful) and we hunt down the Seven Deadly Sins. The battle of each of the Seven Deadly Sins is truly wonderful. Acting according to what they represent, their design and their discourses are really successful. Also, Lust in Darksiders 3 has one of the best depictions I have ever seen. I think you’ll agree with me when you play the game. 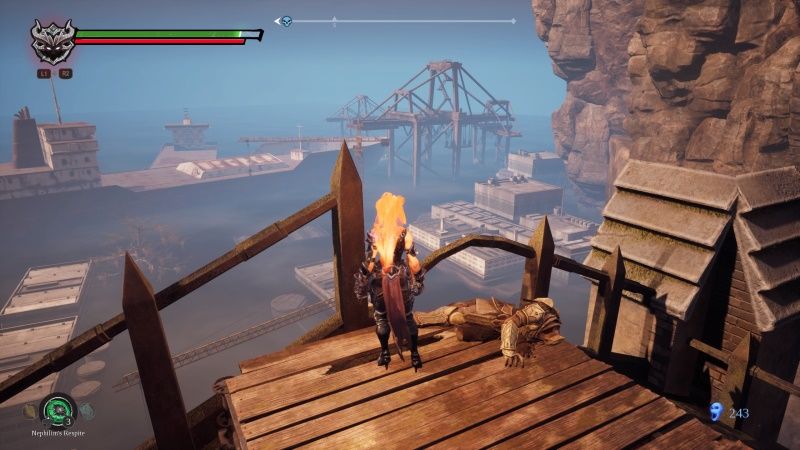 Our main character, Fury, is slightly different from the characters from the first two games. War was a powerful but slow fighter. Death was a mixture of fast-moving assassin-warriors. We can describe Fury as a war sorcerer. He is a nice character using certain elements with his weapons from time to time.

The name of our weapon is Scorn. It is always equipped by the character. In addition, the most important feature of it is that according to the spirit of Fury, it reshapes. Throughout the game, Scorn turns into different weapons as we get features called as Hollow, and these become our secondary weapons. 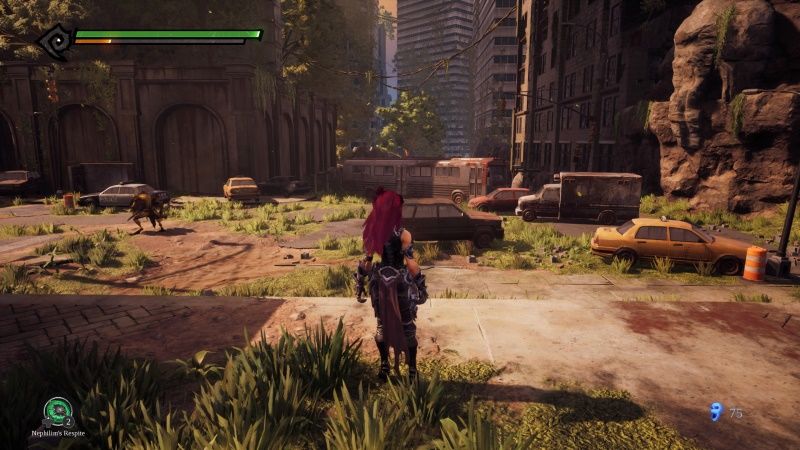 Darksiders 3 has 4 different Hollow in total. Of them; Flame Hollow gives Fury double jump and immunity in areas which is on fire, turning Scorn into a hot chain. The Storm Hollow allows Fury to float through the air and elevate with air currents, turning the Scorn into a lightning spear. Force Hollow empowers Fury, allows him to break some blocks, and protects him from Tempest (you’ll understand what is it when you play the game). It turns Scorn into a giant sledge. Statis Hollow allows Fury to walk on water, stop time for some objects, and also let you climb some walls. It turns Scorn into a double sword. These four Hollow are the main source of all the puzzles in the game. Some puzzles even push you to use all of the four, so you definitely need to learn the Hollows’ features.

I can’t say that the fighting system in the game has changed so much. With two different weapons combined, we tear down everything that’s in our way. Apart from doing this in a standard way, we have a Wrath ability. It has an effect depending on which Hollow we use when we activate it. You may get angry if you don’t use it in crowded battles and small bosses.

Another fighting skill that Fury can use is Havoc. We fill Havoc as we kill creatures, similar to War’s Chaos form and Death’s Reaper form. When you activate Havoc, Fury transforms into a monstrous creature, his health begins to regen, and his damage grows tremendously. I can say that Havoc is as cool as the other skills we used in previous games. In fact, I personally think it is even cooler. I recommend you to use the Havoc form only in difficult battles. 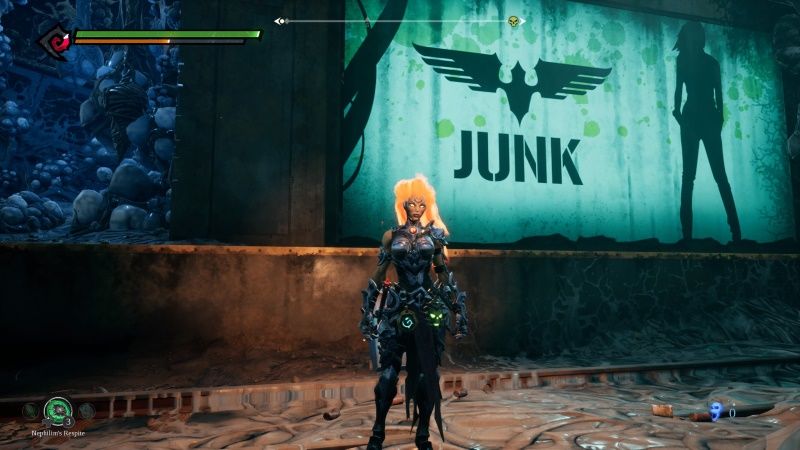 In Darksiders 3, the inventory and weapon system of the second game is removed and I think it is a very good decision. This system, which was added in the second game, really annoyed the players. Instead, developers introduced a few more simple systems with Darksiders 3.

We can upgrade all of Fury’s weapons. This upgrades only increase the damage of the weapon. For this process, we need different types of mine called Adamantine. We find these from the buildings, from the bosses, and from the mini-bosses. You can upgrade your weapon ten times. Don’t forget that.

An enhancement system added to weapons. With this system, we are adding some of the holy objects we can find in the game world (or you can buy them from Vulgrim) to our weapons. You can reinforce these objects with two different items, Angelic Artifact, and Demonic Artifact. Remember, these objects activate an active ability for weapons and for Fury they activate a passive ability. You have to choose one of the two. It is possible to activate them both but it is a little expensive. 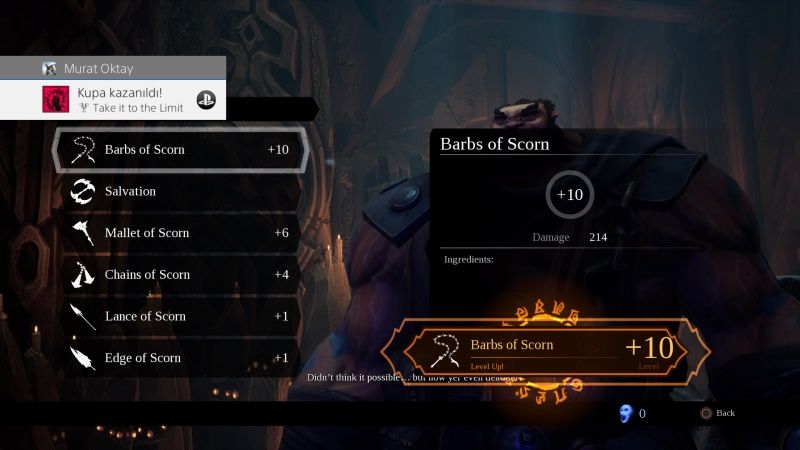 Besides the upgrades of our weapons, it is also possible to level up Fury. We do this by donating a certain amount of soul to Vulgrim, we get a point if we level up. You give this point to Health (which increases the health of Fury) or Strength (increases Fury’s physical damage) or Arcane (which increases the damage of Fury’s Havoc form). As the difficulty of the game increases, this system becomes more important.

To be honest, I don’t have a problem with the high level of difficulty. But while I was writing my Darksiders 3 review, I had two HUGE problems. The first is the Checkpoint system in the game. I’ve never seen such a ridiculous, so unnecessary checkpoint system. It is so bad that it can even make you hate the game no matter what. When you die in the game, the game starts from the last Checkpoint. All the creatures that you killed, comes back again (including the minibosses). Even more interesting, there are no Checkpoints before the bosses. Killed by the boss that you spent 15 mins to get? Well, you have to play 15 mins again. You get really angry by this problem throughout the game.

The second major problem is; the length of the loading screens that I think are caused by the resurrection of these creatures. If the boss kills you, you wait 45 seconds for the game to load (for PlayStation 4 Pro). These loading times are incredibly annoying especially where you die fast in some places. I hope they fix this issue with the upcoming patches.

There are a few more problems in the game. The game sometimes does quick loads while travelling. It can do this sometimes when you are in a fight. Although they do not undermine the gameplay, I hope this will be fixed with the patches. It is not a good thing to lose time in such a difficult game. 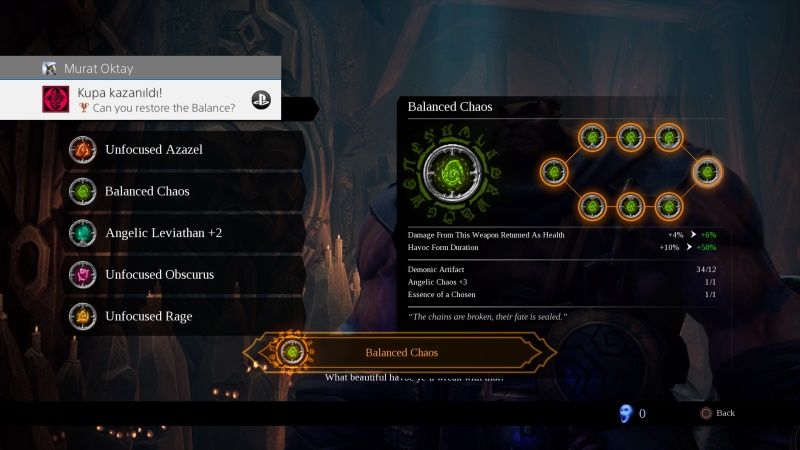 Darksiders 3 continues with its comic-like graphics. I can tell you the graphics aren’t too bad for me. However, sometimes there is a synchronization problem due to graphics while the characters are talking.

The music and the voiceovers of the game are very good. The music played in the battles, the voices of all the characters are really good.

Briefly, Darksiders 3 is a nice game, although it is not great. Many things have been removed such as the inventory system, dialogue choices of Darksiders 2 which have been criticized by the players, it is a game more similar to the first game. It is obvious that it will satisfy the followers of the Darksiders universe. But the loading times and the Checkpoint system absolutely undermine the pleasure of the game. I must say that Gunfire Games must definitely find a solution to these. Hope you liked reading our Darksiders 3 review.

We were wondering whether the Darksiders series would continue after THQ went down. The answer is yes and here is our Darksiders 3 review.